Dealing with iOS9 ad blockers on your ad sponsored blog

20-Sep-2015
NOTE: This article is 3 years or older so its information may no longer be relevant. Read on at your own discretion! Comments for this article have automatically been locked, refer to the FAQ for more details.
A new release of iOS always brings in new features and its share of troubles and this time it hasn't been any different. Since the iOS 9 release date on the 16th of September, Apple made available its content blocker API to developers. This brought out a deluge of ad blocker apps on the App Store, with some topping the charts within moments of release. This may be a welcome addition to many people, but something that many miss is how this hurts those sites and blogs that rely on advertising revenue to pay for their hosting fees.

In fact, the developer of one of the very first ad blocking Apps, Marco Arment, has pulled his app from the App Store and offered refunds for anyone who may have purchased it. He even states the following -

Ad blockers come with an important asterisk: while they do benefit a ton of people in major ways, they also hurt some, including many who don’t deserve the hit.

Now this is a developer with a conscience! I equate using ad blockers to movie piracy in many ways and if you are using one, you are stealing from the content provider, it's as simple as that. Call it coincidence but looking at my AdSense performance reports, I see a notable sharp drop following the dates that the ad blockers became available (a large part of my traffic does come from iOS devices).

So I got to thinking about how to deal with this. I've seen comments stating that content providers should just suck it up and find alternative ways of generating revenue. I'm sorry, but this is the kind of argument that a zealot preacher would sermonise - all talk about how it should be without solid examples or direction about the 'better ways'. I would argue that for a casual blog, ads are the only real viable source of revenue.

Unfortunately there is no easy way to deal with this situation. The only thing I could come up with was to appeal the the readers' sense of decency by supplying a message when an ad does not load.

I played around a little with this idea and with some CSS I got the following to work. It displays the message 'This blog relies on advertising revenue to pay for web hosting. Please show your support by not using ad blockers.' in the area where an ad would usually be. The ad loads over the top, which covers this text, but if the ad was blocked, the message is there for everyone to see.

The result is something like this (with the ad, then without the ad)... 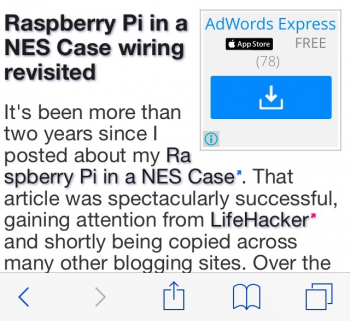 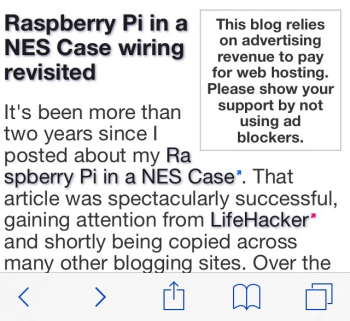 This approach may not work for everyone and it depends on the kind of ads you are showing, as well as the advertising provider. I found that if I used Google AdSense text ads, the background message text would still show underneath the ad, messing up the display, switching to display ads only solved that.

After making this change on my blog, I actually reevaluated the value of some of the ad boxes, and their placement. In the end I removed the very box I've shown in the screenshots above to give the reader a better experience.

I don't think that all ad blockers are bad and evil, but the ones that block every single ad outright should not be allowed on the App Store. Personally I do not mind seeing ads on web sites, but the thing that does annoy me is when sites use those video ads that start playing automatically or ads for Cialis and similar. Those are the ads that should be blocked and quite frankly if you rely on advertising like that, your site is not worth visiting. So I stand by my statement, blocking all ads is stealing from content providers so the general message is if you want to keep seeing good content free of charge, leave the non-intrusive ads alone because they are what sustains the very content you crave!

All content and opinions expressed on this Blog are my own and do not represent the opinions of my employer (Oracle). Use of any information contained in this blog post/article is subject to this disclaimer.
Apple, HTML, iOS, Internet, CSS, Thoughts
Igor Kromin