16-Aug-2017
NOTE: This article is 3 years or older so its information may no longer be relevant. Read on at your own discretion! Comments for this article have automatically been locked, refer to the FAQ for more details.
I've been mining BURST for a couple of months now and have written a number of articles about it already. When I began pool mining, it was a slow and confusing road to travel without a good central location for information, but I slowly pieced as much together as I could. However, the main interface for a mining pool was still quite confusing so I decided to try and find out more about it and document what I understood so others could have a go-to reference for this information.

The pool interface is far from even a barely passable UX design, but it's functional and it works (once you know what everything does!) So lets see what the typical pool UI looks like and I'll explain each of the sections where I placed numbered dots over the screenshot below... 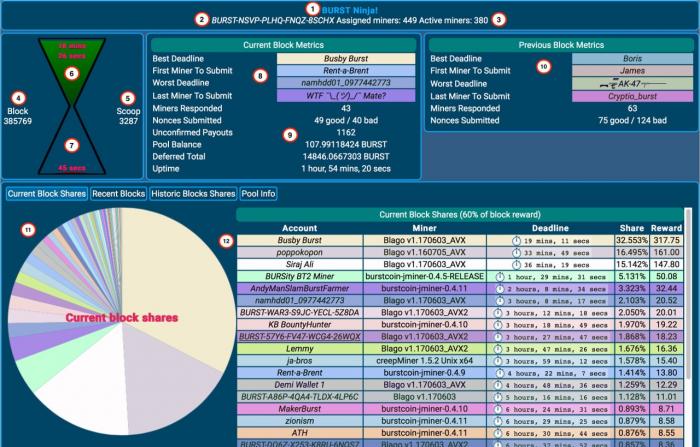 1 - This is the pool's name, quite self-explanatory.

2 - The pool's BURST address, which is used when setting the reward recipient. This is also the wallet address that will pay you your share of the pool's earnings.

3 - Assigned miners is the count of all miners that have set the pool's BURST address as their reward recipient. Active miners are the miners that are submitting nonces to the pool and actually mining.

4 - The number of the current block being mined.

5 - The currently mined block's scoop ID. This takes a bit more of an explanation...

BURST blocks are validated using deadlines. The deadline is calculated using information from the blockchain state. Specifically, the base target (difficulty), the block height, and the previous block's generation signature are used. The scoop is calculated by hashing the generation signature and block height and performing a modulo 4096 division on the result. This gives a number between 0 and 4095. The scoop number determines which part of the plot is read to find the shortest deadline.


6 - Time remaining to mine the current block. This is calculated by taking the best currently submitted deadline and subtracting how long the current block has been mined for so far. This time will decrease dramatically in the first few seconds of a new block mining as miners submit their best deadlines.

Adding the elapsed time and the remaining time gives the best submitted deadline. For example in the screenshot above - 45s + 18m 26s = 19m 11s, which is the best deadline as submitted by 'Busby Burst'.

8 - BURST address or account name for the best/worst/first/last miner in the pool for the current block. This is updated as the pool receives nonce submissions.

9 - General stats on the mining progress, how many miners sent nonces, how many were rejected by the pool and various details on pool balance and running time. Note that there can be more nonces submitted than the number of miners who responded since it is possible to submit multiple nonces while mining. Typically mining software will submit the best nonce it finds and will resubmit another nonce if it finds one with a better deadline e.g. if you have multiple plot files.

That covers just about all of the pool UI. There are other tabs available that I've not gone into any detail on but if there is enough interest in this article, I can write similar ones describing what's going on in the other tabs too.

If you found this information useful and want to send a small donation of Burst, you can send it to me here:
BURST-GTD7-4ZA8-LSUP-7FCXE

All content and opinions expressed on this Blog are my own and do not represent the opinions of my employer (Oracle). Use of any information contained in this blog post/article is subject to this disclaimer.
UX, Burstcoin, Cryptocurrency, Explained
Igor Kromin