19-May-2013
NOTE: This article is 3 years or older so its information may no longer be relevant. Read on at your own discretion! Comments for this article have automatically been locked, refer to the FAQ for more details.
I've had my 3D printer for about a week now, there were and still are some teething problems with it, but I'm fixing them one at a time. So here are the main issues I had so far and the solutions I found for them: filament spools unwinding in all crazy directions and fluorescent lights giving off electromagnetic interference and crashing the printer.

First issue: filament spools. This was a pain to deal with, as the filament would unwind, it would snap and twist on the table. It was a real pain to have to unwind it all the time. So I thought that I'd print some hooks to hang it under the table. I went through a few different hook designs, but settled on these: 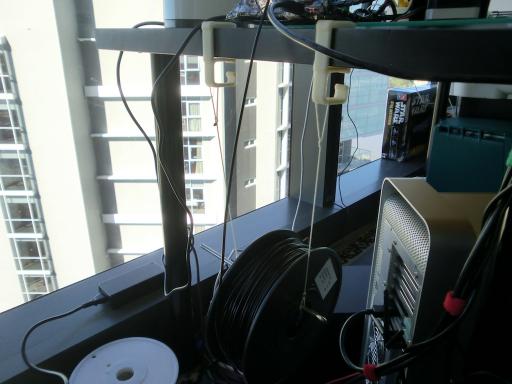 They're quite sturdy and keep even a 2kg spool up without problems. The string hanging from the hooks is just nylon with melted ends so it doesn't untie. Then I used a metal peg through the spool itself to hold it in place and let it spin. Works pretty well, as the extruder sucks filament in, the spool turns and unwinds properly, no snapping.

The other issue was more troublesome. I've noticed that when I flicked the light on/off in the office room, which is where the printer is, the printer would crash. I've observed the same issue when I was flicking the desk lamp on and off too. Both these lights are fluorescent, which does give off some EMI. The first thing I tried was to move the printer to a different socket for power where it was the only thing plugged in, that didn't really help, it would still crash when the room light went on/off.

I contacted the printer manufacturers and they suggested a Faraday cage around the electronics. I didn't have any materials on hand to make a Faraday cage, so I tried an alternative...a conductive grid anti-static bag. I figured that is as close to a Faraday cage as I can get right now and if I cut some holes for the wiring through the bag bug have the circuit board inside, it might help. 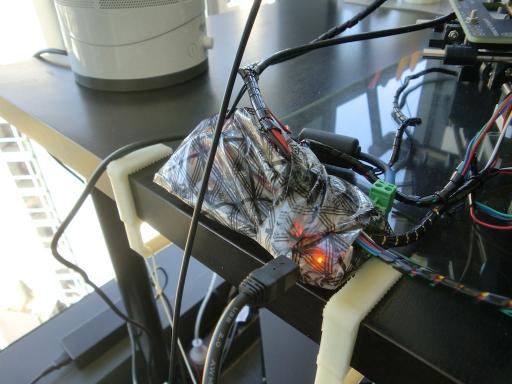 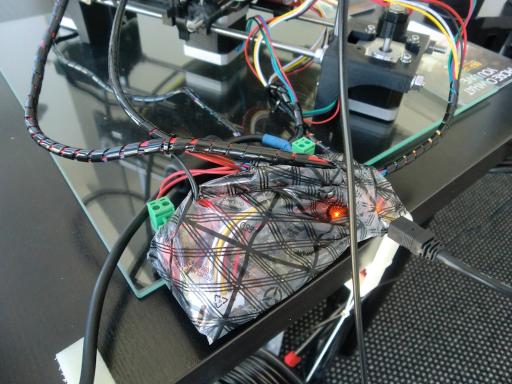 So did it work? Well flicking the lights on/off didn't seem to crash the printer. I will need to do some more testing, but so far I think this did make a difference. The only thing that worries me now is the fact that the electronics are now sealed in and there is no airflow around the heatsinks, so it might get hot.

I'll probably be looking at an alternative solution for the electronics casing, with a metal mesh interior to help with the EMI.

Meanwhile, here are some prints I've made:

Gyro rings, the whole gyro is not finished yet due to the printer crashing. 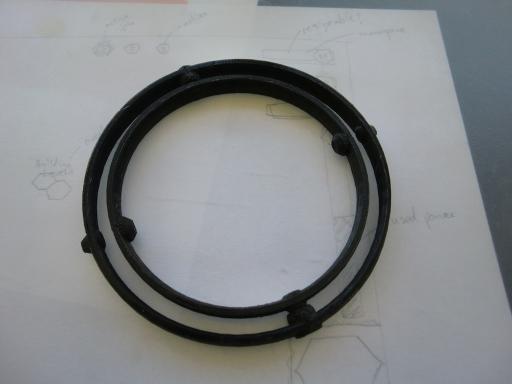 Half a cup that has an ear on it's side. This took about 3 hours to print until I turned a light on and the printer crashed, but it works pretty well as a tool holder. 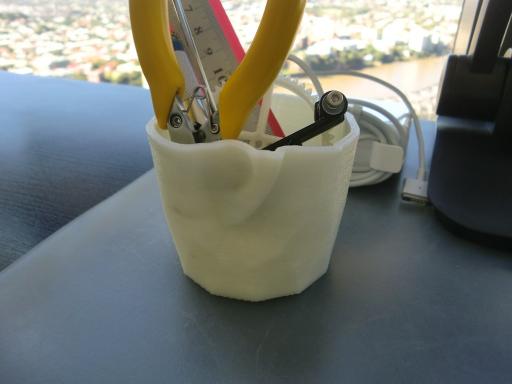 All content and opinions expressed on this Blog are my own and do not represent the opinions of my employer (Oracle). Use of any information contained in this blog post/article is subject to this disclaimer.
DIY, Electronics, Modding, 3DPrinter
Igor Kromin