Ready Player One by Ernest Cline

15-Apr-2014
NOTE: This article is 3 years or older so its information may no longer be relevant. Read on at your own discretion! Comments for this article have automatically been locked, refer to the FAQ for more details. 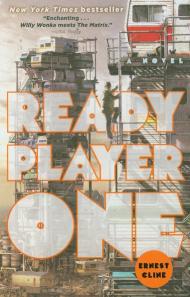 I finally got around to reading this amazing book: Ready Player One by Ernest Cline and I have to say, I'm impressed. This book was recommended to me a while back but because I was trying to finish The Culture series by the late Iain M Banks, this one was put on a back burner. If you loved Snow Crash, this is a book for you. The story is told from the first-person perspective of the protagonist, who is a penniless teen born to a world of despair, suffering, hunger and complete poverty; the future.

In this bleak future that Cline paints, the society has declined to such levels that most people are poor, have no jobs and live in terrible conditions, their only escape is to login into a virtual world called the OASIS: Ontologically Anthropocentric Sensory Immersive Simulation. What? It's just a fancy way of saying a massively online role playing game using virtual reality. Each player wears a headset and gloves to control their character, with more advanced setups also available where players can wear full body suits, have smell generators, walkable 'treadmills' that control the character's movement, etc.

So there is this virtual world, this is where most of the story is set. The creator of this world has passed away and in his will left his entire fortune to whoever finds the Easter Egg that he has planted within the game. To find this Egg the players need to find 3 keys and open and complete 3 gates (quests). Once they do that a final challenge awaits them and they win the entire fortune. In the story, the players have been trying to find the first key for years with no luck and finally our protagonist stumbles upon the first key. This sets a whole bunch of events into motion including other players getting back into the hunt for the Egg and an evil corporation trying to get to the keys first and complete each of the gates in order to take full control of the OASIS for themselves, and they don't stop until they get what they want - no matter the cost.

The story is quite interesting and if you love your geek lore, 1980s pop culture, classic video games, obscure facts about Sci Fi movies and lots of Dungeons and Dragons references, well, your senses will be overwhelmed. I felt at times in the story this was a bit extreme, it was a total geek out even for me, which made the story a little less believable in my opinion. However despite that, the characters where easy to relate to and I felt a sort of connection to them. It was a nice touch having the story told from the first person perspective too.

Definitely two thumbs up (and over 9000 geek points), I can't wait for the next book by Cline, Armada, which is not scheduled to be released until December 2015, but given how epic his first book was, it will be worth all the wait.

All content and opinions expressed on this Blog are my own and do not represent the opinions of my employer (Oracle). Use of any information contained in this blog post/article is subject to this disclaimer.
Review, Books
Igor Kromin