7200 RPM HDD vs SSD performance in Skyrim for PS3

15-May-2014
NOTE: This article is 3 years or older so its information may no longer be relevant. Read on at your own discretion! Comments for this article have automatically been locked, refer to the FAQ for more details.
I'm still playing Skyrim, yes it's an amazing game! However, I've been getting frustrated with its loading times. So I thought, why not try an SSD upgrade, they are so cheap now it's almost a crime NOT to do it. The results are quite favourable, they aren't going to blow your socks off, but will definitely improve the gaming experience.

In a nutshell the graph below summaries what I found to be the times before and after the SSD upgrades (in seconds). I only tested with Skyrim, but any game that requires lots of loading of data and accessing the internal disk should show similar characteristics. Please note that my PS3 already had a HDD upgrade to a 7200 RPM disk (vs it's original 5400 RPM), so this is not a comparison of the standard HDD in a PS3 to an SSD. 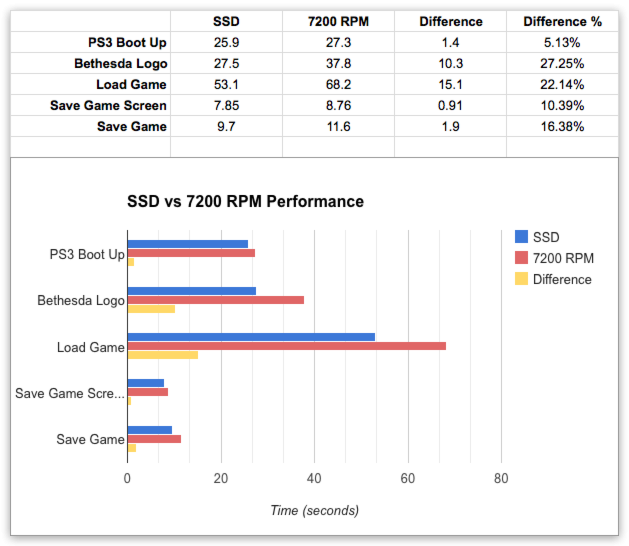 I followed this guide for the actual upgrade process: http://joypadandme.com/tech-tips/tech-tips-upgrading-a-ps3-slim-hard-drive/. I won't be talking about the upgrade steps since it's all covered in that guide.

This is what I already had in my PS3 vs what I was putting in: 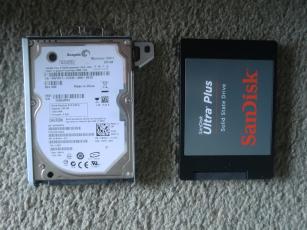 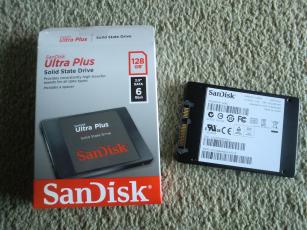 The disk inside the PS3 was a Seagate Momentus 7200.2 with a 200Gb capacity. The new disk is a SanDisk Ultra Plus SSD with a 128Gb capacity. This is an obvious downgrade in terms of storage, but that's something I was happy to sacrifice.

It took around 3 hours to do the backup and then the same time to restore it, this will take longer if you have more data, I only had around 50Gb on my drive.

So getting back to the actual results and what they mean: The PS3 boot up times did not vary so much, in fact it was hardly noticeable at all. I measured this by timing how long it took to get to the game selection screen after turning the PS3 on. Next, the Bethesda logo, this is measured from the time I launched Skyrim to the time the Bethesda logo appears (assuming you agree to the warning that pops up without delay). This time was significantly faster with the upgrade, but this is a one time wait that's needed during the whole game session, so it's not a very interesting improvement.

Where it got much more interesting was the loading and saving times. Loading of a previously saved game was about 20% faster with the SSD, which is a difference of about 15 seconds. If you're playing for a few hours, this will save many many minutes of sitting around waiting for levels to load. The saving was quicker too, but the biggest gains where still in the loading times.

Overall this may not seem like a huge deal, but the game did feel much snappier with these modest performance improvements. Considering this SSD cost me a mere $89, this is money well spent, so I'd definitely recommend an SSD upgrade.

All content and opinions expressed on this Blog are my own and do not represent the opinions of my employer (Oracle). Use of any information contained in this blog post/article is subject to this disclaimer.
Modding, Games, Console, OSX
Igor Kromin