Struggle to get the Simplecom USB 3.0 hub working at full speed on a Macbook Pro

1-Jun-2016
NOTE: This article is 3 years or older so its information may no longer be relevant. Read on at your own discretion! Comments for this article have automatically been locked, refer to the FAQ for more details.
I got one of these USB 3.0 hubs recently because I needed to transfer large amounts of data between two disk drives. What I thought would be a painless exercise ended up wasting hours of my weekend time.

The USB hub is a simple 4 port USB 3.0 hub. It has an aluminium body and can have an external power adapter plugged into it if needed. Its website claims that it will work with OS X but the reality was very different.

Sure it worked just fine as a USB 2.0 hub, but getting it to work as USB 3.0 was a massive struggle.

What I was doing was copying about 2Tb of data between two external disks which had their own power so they weren't drawing any USB power. The USB hub had another USB 2.0 hub plugged into it that had all of my peripherals connected (mouse, speakers, etc). The setup partially is shown below.

The problem was that whenever I connected the hub it would only be detected as a USB 2.0 device. This meant that the 'USB ATA/ATAPI Bridge' was running at 480MBps instead of the 5gbps I wanted to transfer my data quickly. It didn't seem to matter which port on my MacBook Pro I plugged it in, as long as the the source hard disk was already plugged in, the hub wouldn't work at full speed.

After much plugging in and unplugging of cables and trying different combinations of ports and order of plugging devices in I managed to get both hard disks connected via USB 3.0... 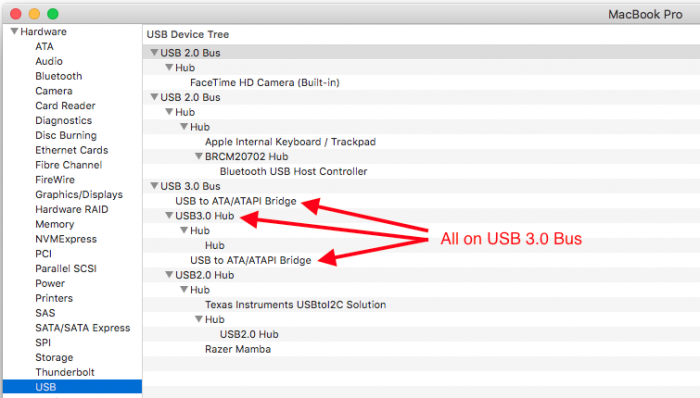 So turns out the hub does work at USB 3.0 speeds, but you have to perform some kind of sacrificial ritual to get it doing so...or perhaps it's my Mac's fault - after all it is a 2012 original rMBP model. Who knows, but it didn't work first time anyway.

Using Carbon Copy Cloner I did manage to get some impressive speeds in the end... 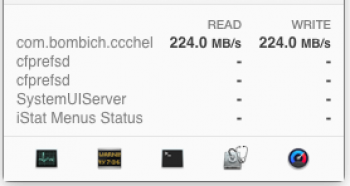 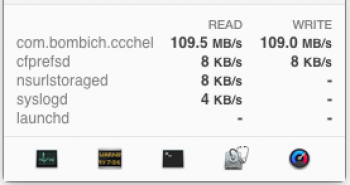 After copying all the data across I've disconnected the hub and haven't tried it since, though my feeling is that it won't work first time next time either. I don't remember the sequence of connections to get everything recognised as USB 3.0 so I am not keen to try this any time soon.

All content and opinions expressed on this Blog are my own and do not represent the opinions of my employer (Oracle). Use of any information contained in this blog post/article is subject to this disclaimer.
Apple, Mac, USB
Igor Kromin