4-Aug-2017
NOTE: This article is 3 years or older so its information may no longer be relevant. Read on at your own discretion! Comments for this article have automatically been locked, refer to the FAQ for more details.
This issue started some time around the 2nd of August 2017. My GSuite Gmail started rendering like this... 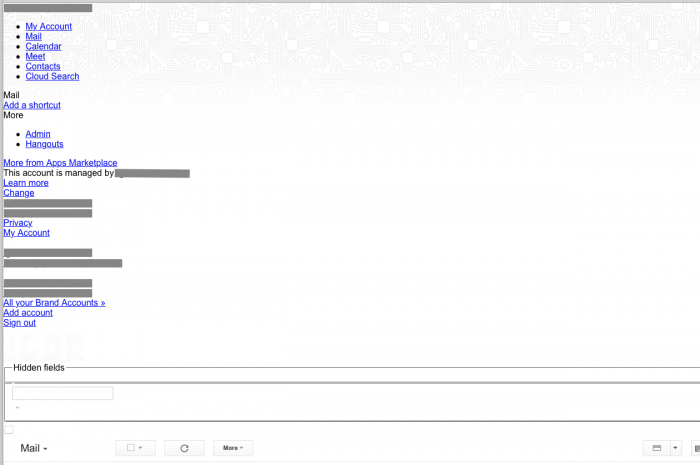 Update (5 August 2017) - Google has finally addressed this issue and G Suite Gmail is loading properly again. How did they do it? They removed the Content-Security-Policy header and replaced it with Content-Security-Policy-Report-Only header. This means that CSP is effectively not being enforced in Gmail any more.

If you're interested in the details of my analysis of this error, continue reading...

Opening up the JavaScript console in the Safari's Develop menu showed a number of errors that were to do with the Content Security Policy.

Here's the text for the above errors...

I looked further into this and saw that G Suite Gmail was indeed using CSP by setting a nonce value in the <script> element like this...

The HTTP headers however contained the correct nonce value in the Content-Security-Policy header...

This was the actual text for the header...


This is what I believe is going wrong - the nonce appears in this part of the CSP...

...however Safari is complaining about this - directive 'script-src' contains an invalid source: ''strict-dynamic''. So the entire script-src line is being ignored, including the valid and correct nonce!

This causes the Gmail interface to bomb out since the very first script is being blocked from being executed.

Interestingly though, the free Gmail (as in not the paid G Suite version) DOES NOT send the nonce as part of the script...

I am guessing that Google implemented this new security feature without fully testing it and hence this issue is being seen now. The only solution to get G Suite Gmail working at the moment is to use the simple HTML version as documented here.

I hope that Google will apply refunds for the outage caused as a result of this.

All content and opinions expressed on this Blog are my own and do not represent the opinions of my employer (Oracle). Use of any information contained in this blog post/article is subject to this disclaimer.
JavaScript, Google, Security, Error, Email
Igor Kromin