Mini review of the Sonoff B1 WiFi light bulb

23-Sep-2017
NOTE: This article is 3 years or older so its information may no longer be relevant. Read on at your own discretion! Comments for this article have automatically been locked, refer to the FAQ for more details.
The Sonoff B1 WiFi LED bulb has been out of stock for a while but is finally available again and I had one arrive on my doorstep last week. This is a completely hackable bulb that I intend to play around with more but first lets see what the bulb is like out of the box.

The packaging was done pretty well, even though there was no glass, the bulb was packaged as if it were a glass bulb. The only other items in the package were the warranty card and the instruction/set up manual. 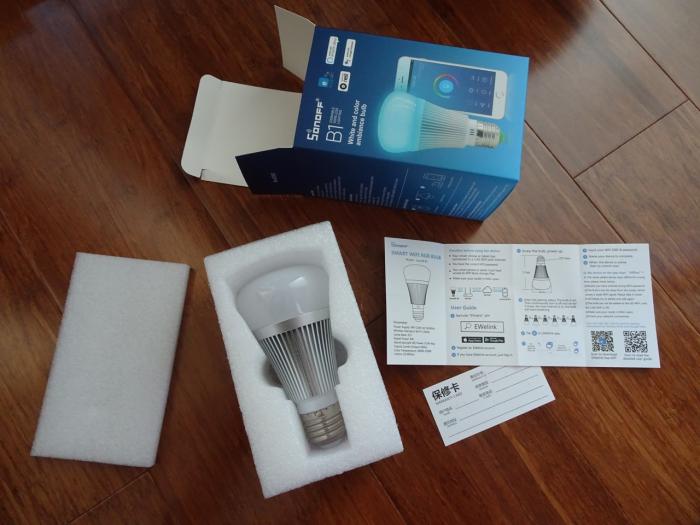 Delivery packing was great too by the way, thanks Itead! 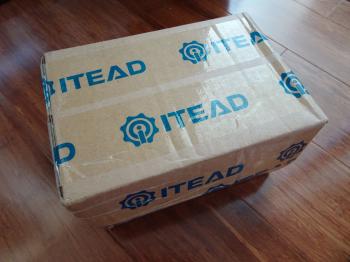 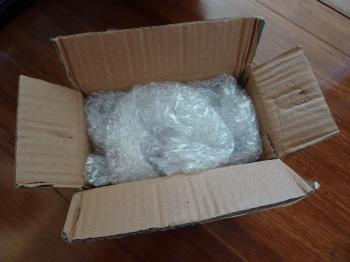 The user guide and set up instructions are pretty clear. One side was in English, the other side I assume was in Mandarin. These instructions directed me to the App Store to download the EWelink software that controls the bulb, more on that later. 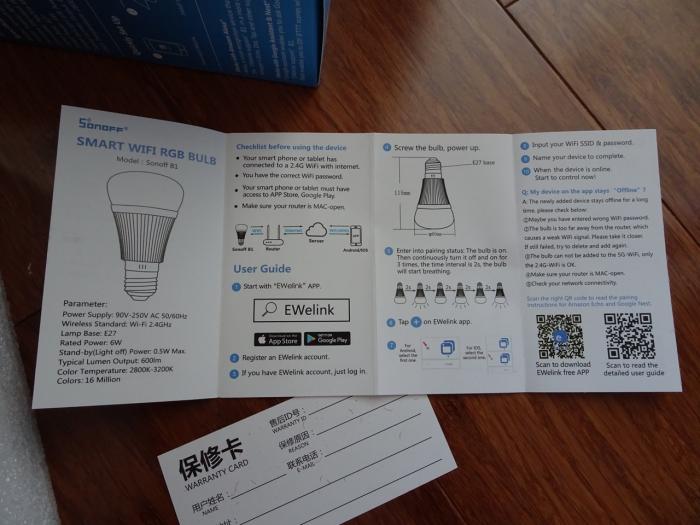 The construction of the bulb was quite solid and it definitely had some heft to it. 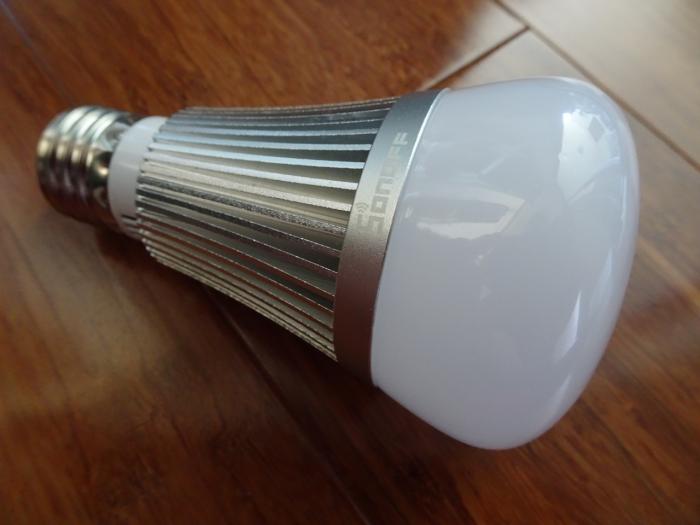 For power consumption, my energy meter showed it was using between 0 and 0.5W when in the 'off' state. This was according to specifications on the box. In the brightest white light mode it was using 2.4W which was significantly lower than its rated 6W figure.

Speaking about brightness, since this bulb is directional, it will not be anywhere near as bright as something like an Edison style LED bulb for example, but it does get quite bright on the white setting. The output was rated at 600lm. Something I noticed that I didn't like was that in colour mode the brightness was significantly lower vs white mode. Maybe that was due to the number of LEDs running for white mode vs a single colour, though I suspect it was more to do with the software. I'll get into that another time once I've been able to flash the firmware on this bulb. 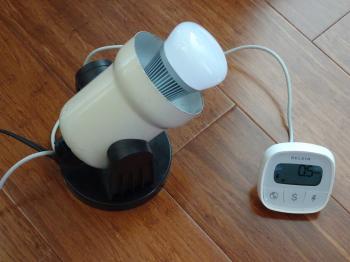 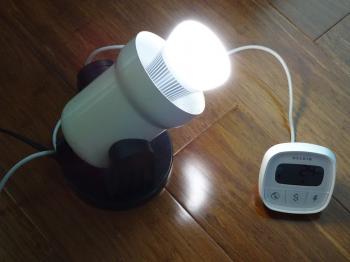 Back to looking at power consumption, primary colour modes seemed to hover around the 1W mark (e.g. green) and mixing multiple primary colours bumped it higher as expected - e.g. 1.4W for purple. 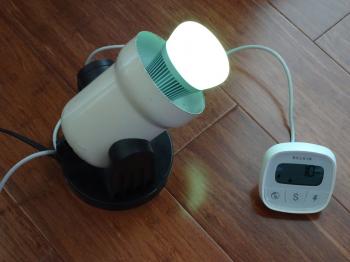 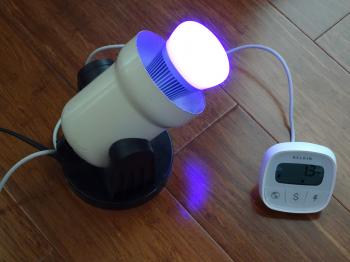 The EWelink software for this app was not the best I must say. It required registration, the interface felt clunky with some obvious UX issues like leaving auto caps enabled for password fields, not using masking characters when entering a password, etc. I'm a big proponent of good UX design so this really irked me.

Lets have a quick look at the sign up process...I had to download the app, enter some details, get a verification code and then I was done. Not painful really, but I would have preferred not to have to sign up for an account just to control the bulb (it is only accessible on my WiFi network after all). 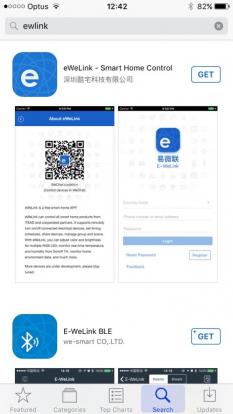 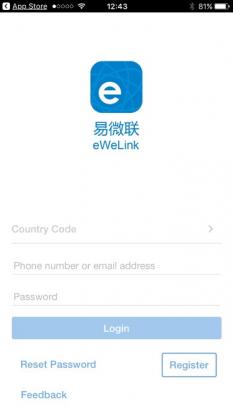 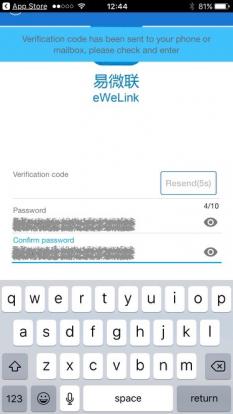 The pairing was easy (but you have to have your phone on the 2.4Ghz WiFi for it to work!) Initially I was connected to my 5Ghz network so wasn't able to pair. After pairing, it was possible to control the bulb from a 5Ghz network as long as that network was on the same router as the 2.4Ghz network (i.e. you have a dual band router.)

To pair the bulb I had to turn it on and off 3 times until it started 'breathing', that's when the bulb was in pairing mode. Waiting too long canceled this mode, which happened to me while I was taking photos, doing the triple on/off cycle put it right back into pairing mode again. 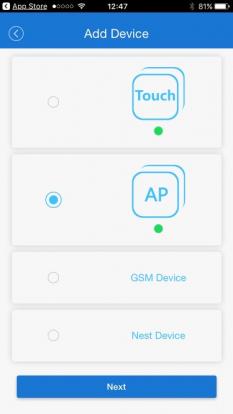 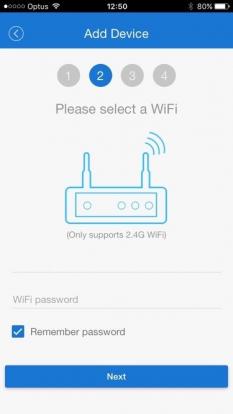 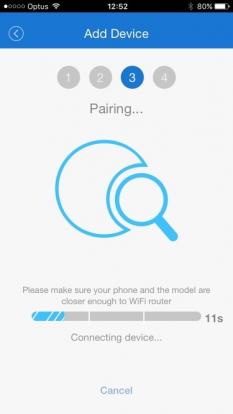 Once pairing was done, I was asked to name the bulb and then could control it. Here's a short video showing the controls with white and RGB settings. I didn't try to set up any timers or use other features in the app apart from changing colours and brightness.

The bulb worked pretty well overall. Sometimes there were problems though. For example I noticed that if I left the app while in the screen that controled the bulb brightness or colour, the next time I went into the app, I would get this rotating connection indicator until a connectivity error came up. Boo. However, whenever the app was closed on its home screen, it worked without issues the next time it was opened. I think this is more of a problem with the EWelink software than the bulb itself. 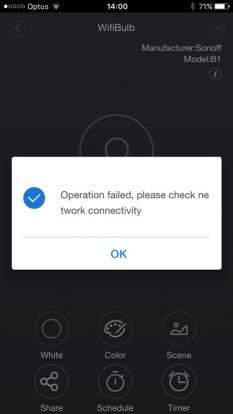 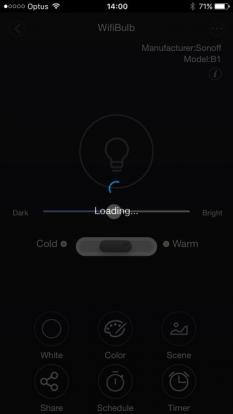 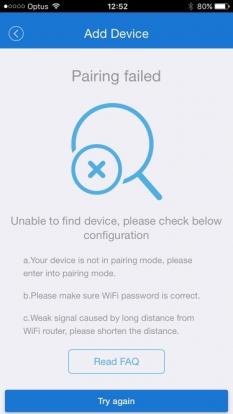 There were some other issues with EWelink as well like it would not always remember the last colour setting of the bulb and would revert to the default red on the colour setting for example. This didn't happen every time, but was something I noticed at least a couple of times while doing this review.

The next part is where it gets interesting. As I mentioned at the beginning of this article, the bulb is completely hackable. Over the next couple of weeks I intend to explore its hackability to create a rear illumination behind my TV for extra effect with colours changing based on what's on the TV at the time. Will see how well that turns out, will have more updates soon!

Update: I've taken the bulb apart, that's the first step in flashing its firmware. To see how that's done read this article - How to open the Sonoff B1 wifi LED bulb to access its internal circuitry.

All content and opinions expressed on this Blog are my own and do not represent the opinions of my employer (Oracle). Use of any information contained in this blog post/article is subject to this disclaimer.
Electronics, Review, Hacking, Sonoff
Igor Kromin