14-Dec-2017
NOTE: This article is 3 years or older so its information may no longer be relevant. Read on at your own discretion! Comments for this article have automatically been locked, refer to the FAQ for more details.
I've recently had a chance to check out the Stellar Phoenix Photo Recovery software on my Mac and was surprisingly impressed by this tool. This particular app is targeted towards anyone who deals with memory cards, USB sticks, and has a lot of photos and videos. It would be ideal for a photographer for example, but anyone could benefit from it if you've had an accidental file deletion or if you've formatted your SD card without copying all the files from it first.

So lets have a look at what this software can do and where it falls short. Starting with the installation... 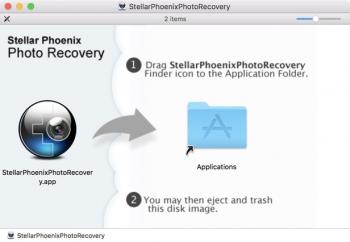 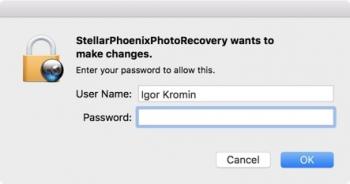 As you would expect for any Mac software, after downloading, unzipping and opening the .dmg file, you simply drag it to the Applications folder. That's it! No wizard installers, no questions, no mess! Launching it is a matter of double clicking or opening via Spotlight. The only thing that irked me was that every time you ran this software you have to enter your password. I understand this is necessary for some of the disk level permissions, though I would have preferred that the password is only requested when necessary, not on start up. I was also surprised that the password prompt didn't support the new Apple Touch ID support, but that's not a big deal.

After launching you get this simple yet elegant interface... 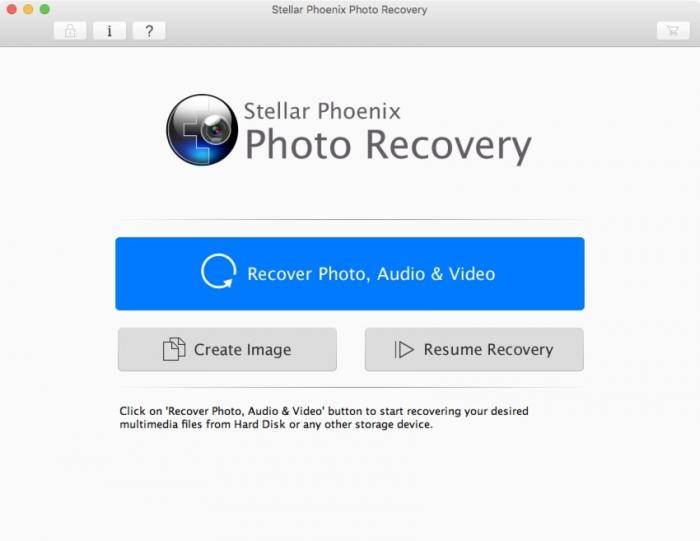 Clicking 'Recover Photo, Audio & Video' takes you to the next screen that lets you select a drive to scan. What I liked about this screen is if you inserted a USB stick or SD card into your Mac it recognised it as an external device and defaulted to it (with the option to view other devices). Unfortunately having my camera plugged in while opening this screen didn't detect it as an external drive so I had to manually select it, no big deal there.

Other options included here are for making an image of your external drive and resuming a previous scan. The 'Create Image' option is very nice if you have a failing disk and need to try and preserve it ASAP before it completely fails. 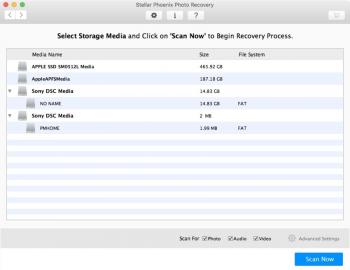 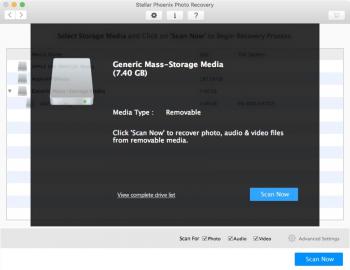 This device selection screen has some advanced settings as well. If you click 'Advanced Settings' you can choose exactly which file formats will be looked for during recovery. You can also choose which part of the disk to look at - this is based on sectors so is probably way too advanced for the average user, but it is a nice option to have. 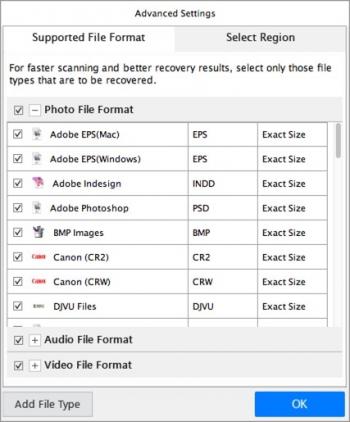 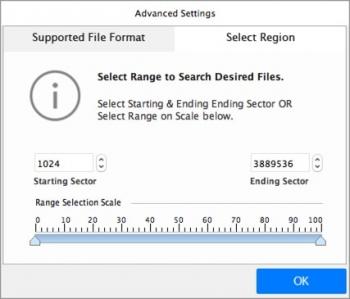 Onwards to the scanning...Clicking 'Scan Now' after selecting a device to scan brings up a new window with the scan progress and view of all the found files. The scan was actually pretty quick, about 10mins for a 16Gb SD card. 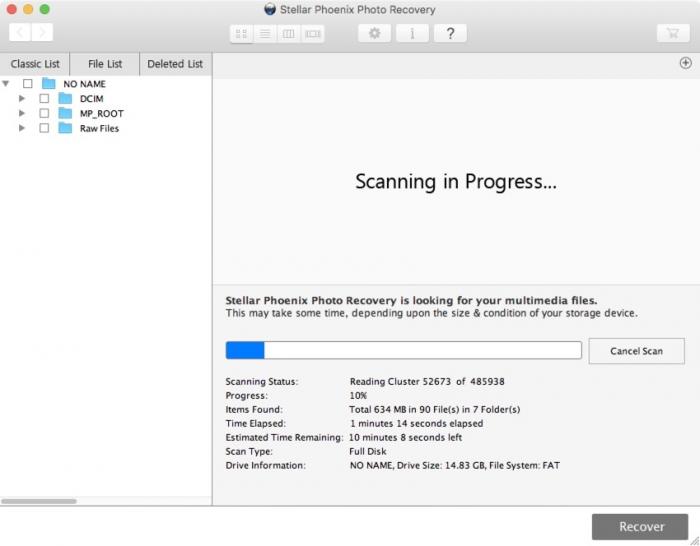 After the scan I was told that I could select files to recover. That meant it's found files on my card! 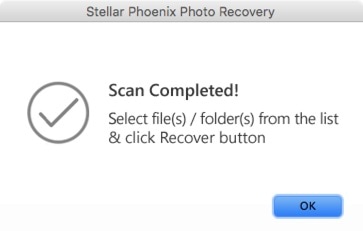 The scan window is used to browse all the files that were found too. These get sorted into their respective folders but it's also possible to look at raw files. There are tabs to let you further filter which files you want to see, the 'Deleted List' tab probably being the most useful. Found files can be previewed here, however I couldn't get previews for every single file that was found. 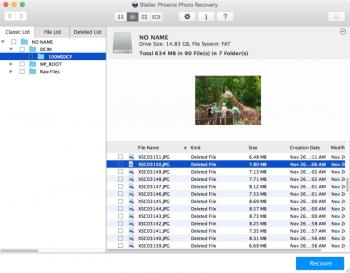 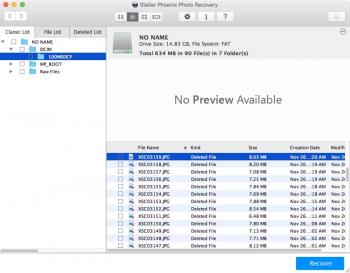 Clicking 'Recover' saves all of the found files to a location of your choosing, as expected. 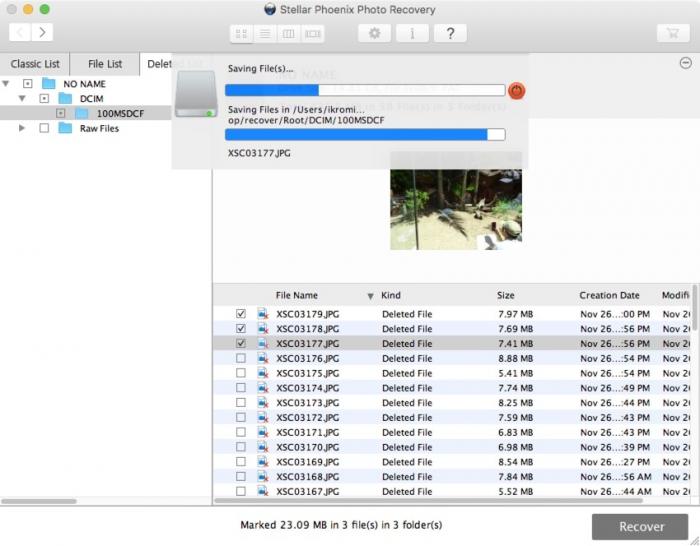 What I found interesting is each of the recovered photos had a thumbnail created for it automatically. That's a handy feature to have. The thumbnails were prefixed with 'T' in front of the file name. 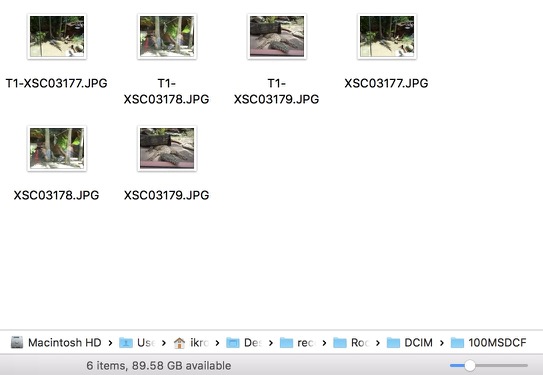 I then decided to do some experimentation and formatted the SD card inside my camera (using the camera itself)... 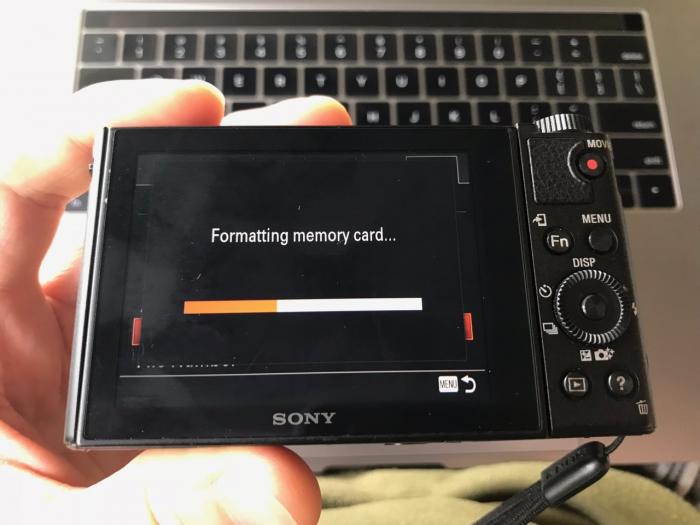 I re-ran the scan afterwards and got a whole lot of nothing... 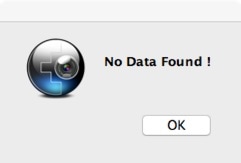 It seems that my camera didn't just format the card but securely erased all previous data on it! I then took another SD card, from my dash cam this time and did a quick format of it directly on my Mac... 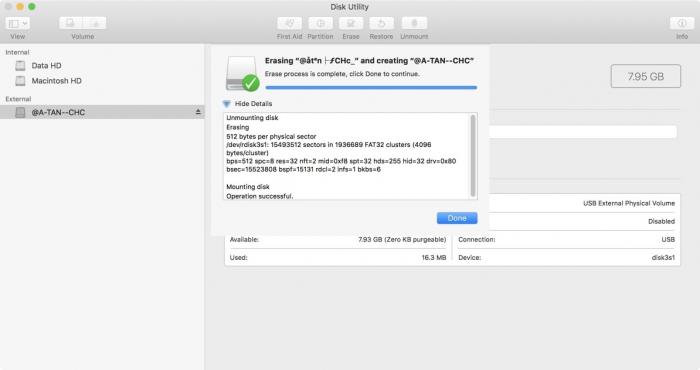 After running a scan on that card, I was able to recover all of the AVI files, as well as a bunch of JPEG files that I didn't know where even there. 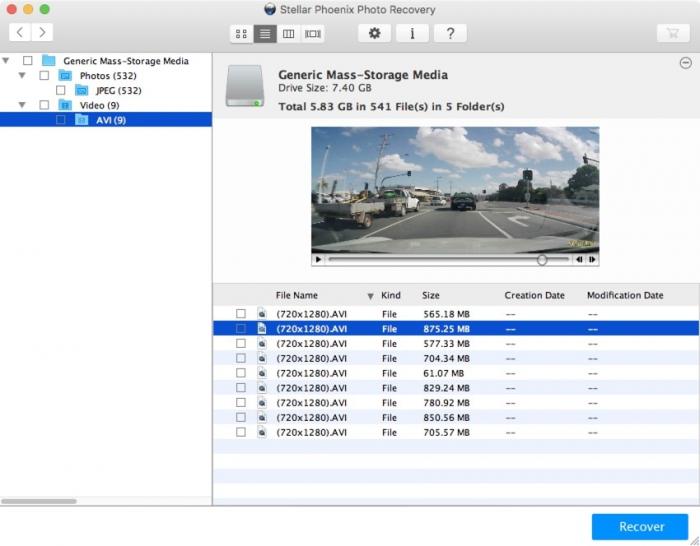 The AVI files were all of the erased footage of my driving and all worked. However, when I tried opening the JPEGs, none of them would open. I'm guessing these were not JPEGs at all but false positives identified by the scan that were actually individual video frames from other AVI files that were on the SD card previously.

So does this software work? Indeed it does, not in situations where a secure erasure occurred, but that's to be expected. If you simply deleted your files or did a quick format, those files will likely be recovered. The software is fast and simple to use and for a price between $49.99 and $99.99 could be invaluable if you're trying to recover your precious photos or videos.

All content and opinions expressed on this Blog are my own and do not represent the opinions of my employer (Oracle). Use of any information contained in this blog post/article is subject to this disclaimer.
Videos, Review, Software, DataRecovery, macOS, Photography
Igor Kromin