11-Feb-2018
NOTE: This article is 3 years or older so its information may no longer be relevant. Read on at your own discretion! Comments for this article have automatically been locked, refer to the FAQ for more details.
It's been a while since we put this kit together and I've been meaning to write about it but for various reasons this post kept on being delayed. I'm finally getting around to it now though! This is the Frilled Lizard robot kit that can be purchased from numerous online shops and shops that sell fun kits and toys.

The kit claims to have "interactive AI". I wouldn't go as far as calling it AI though, it does react to obstacles and people but there's nothing really intelligent about it. The I/R functionality is used to detect human/animal movement. The two modes referred on the box are either chase or run away i.e. it will either try to hide from you or try to follow you around. 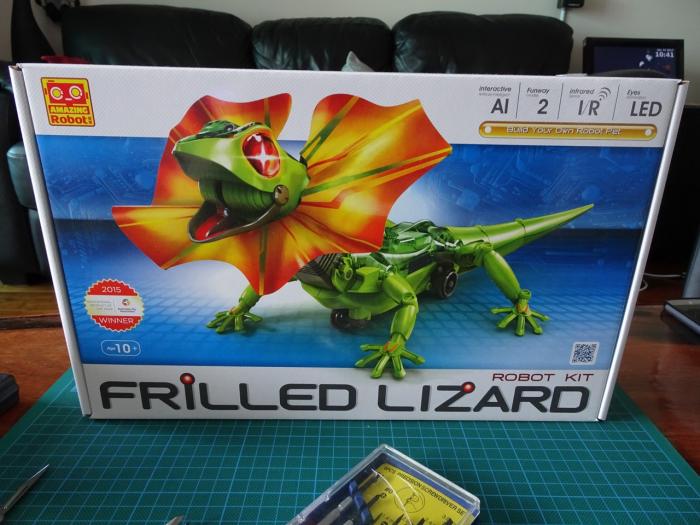 Inside all the parts were in their separated bags. I was surprised to see how many individual plastic components there were. 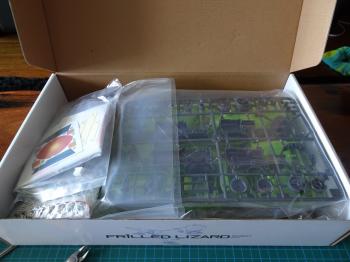 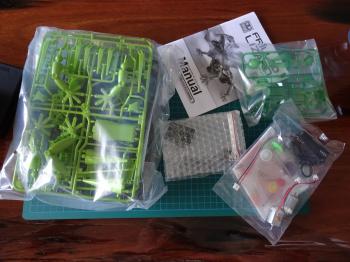 The plastic parts were either green, for the lizard exterior, or grey, for the internal component housings. 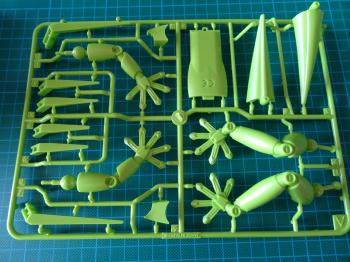 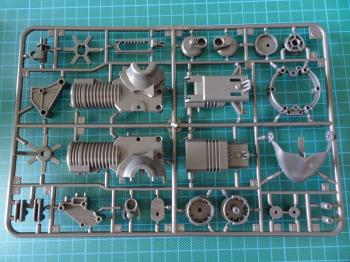 There were other plastic parts, namely the gears, that came separately. All of the grey motor housings had some kind of gearing system set up inside them and were quite easy to put together. 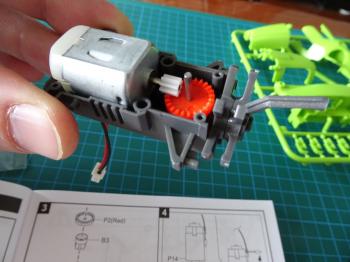 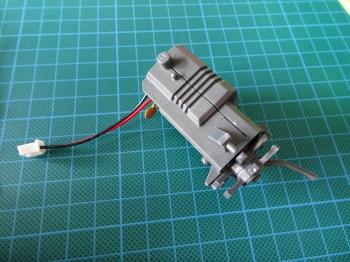 The frilled neck part was fun to assemble. The 'frill' had to be cut out - it was just a piece of plastic sheet with a decal printed on it. Then there were six attachments that had to be secured to it by double sided tape. All of this was attached to a motor assembly, since this part moved when the lizard was scared/aggressive. 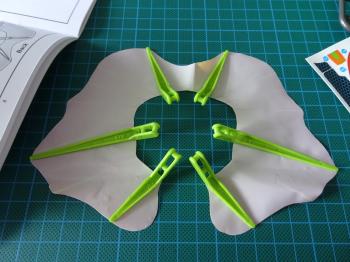 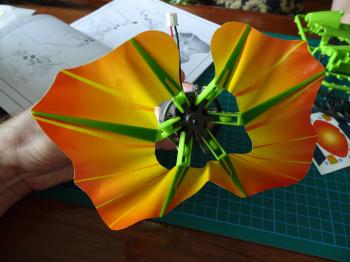 The eye assembly had the IR LED and IR receiver along with LEDs inside the eyes. It all came on a pre-assembled PCB. 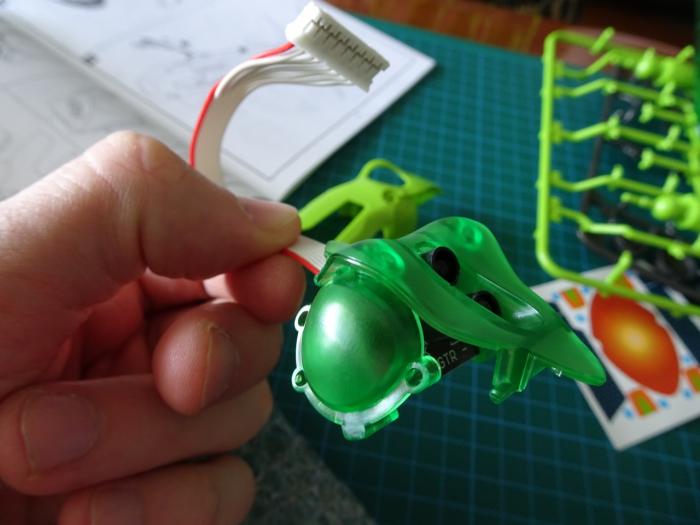 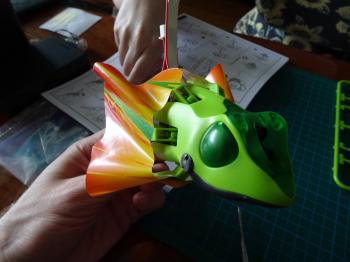 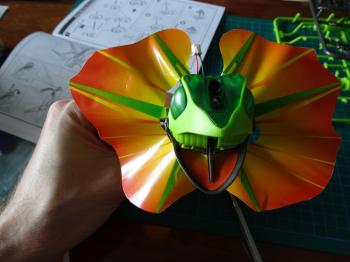 The leg motor assembly had quite a few more gears than the frill motor assembly. Something to note here was the legs did not make contact with the ground and hence did not actually move the lizard. There was a rubber roller attached to the leg movement motor that made the lizard roll around. 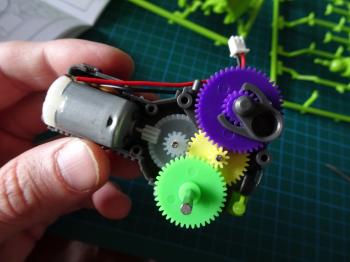 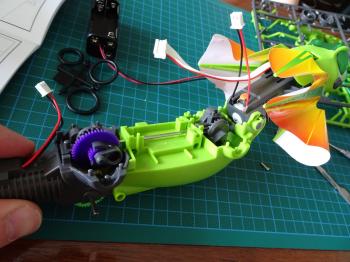 The main PCB was where everything plugged in. It seemed to have some power regulation components on it along with a chip that presumably held all of the logic for the lizard's "AI". Not much to see there and no room for customisation. 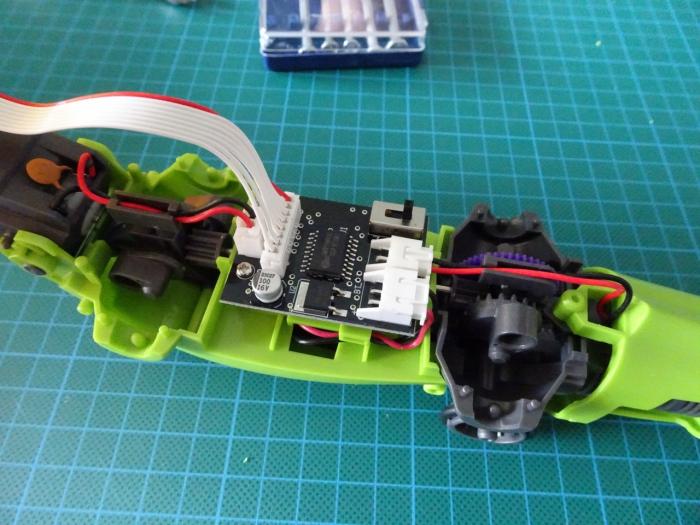 Finally all put together and it does indeed look like a frilled neck lizard. 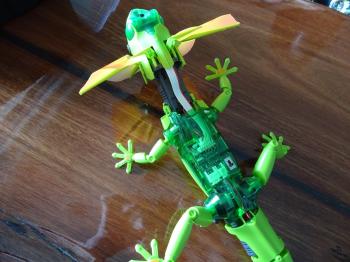 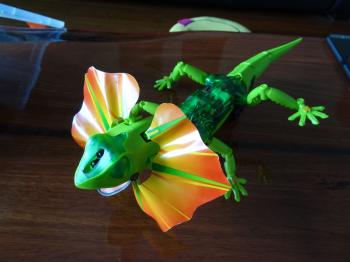 Here's a video of the lizard in action...

Something to note about this robot was how loud it was. It wasn't really something you would want to be hearing all the time. It was fun to play around with for a little while but due to it's noise and movement limitations it did get boring quickly.

We've only really used this robot a few times, now it mostly just sits among our Lego dinosaurs and keeps the fish in our fish tank company.

All content and opinions expressed on this Blog are my own and do not represent the opinions of my employer (Oracle). Use of any information contained in this blog post/article is subject to this disclaimer.
Electronics, Review, Robot
Igor Kromin