5-Aug-2018
Ah the world of cheap, unlicensed consoles that are made to look like something legitimate and real. I've not owned of these these but have been curious about what they would be like. Recently a friend has gifted me an iNext IN-1001PB handheld and finally my curiosity has been sated. For the better or the worse here's what I found out!

A quick note before we go on - I don't support software piracy and if you use this device to play ROMs of games you don't own that is your call, I'm not here to preach so you make your own decisions.

The packing for the console was very simple. There was the console itself, and a couple of zip-lock, anti-static bags filled with the power adapter (a 5V USB adapter for the US wall sockets) and headphones and A/V cable. Instructions you say? Nope, there weren't any. The description on the side of the box was typical marketing of the features but no details of the specifications of the device. 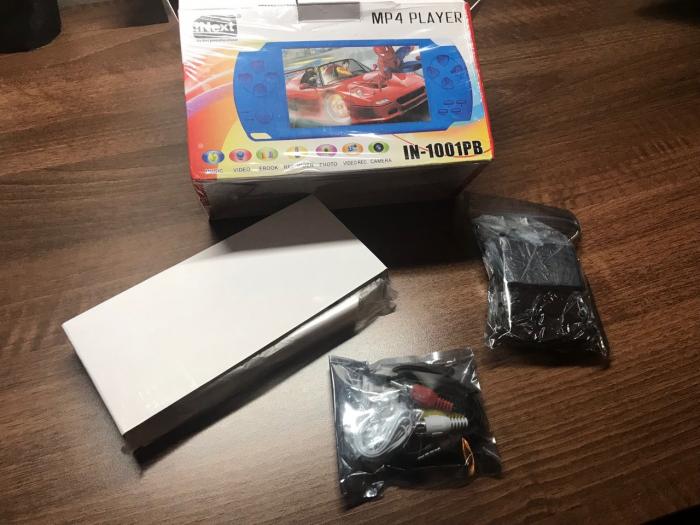 The console itself was shaped to resemble a Sony PSP. Of course there was no UMD slot and its weight was...well it was very light! There was a camera on the back though. It was interesting to see both a D-pad and what looked like an analogue control stick (both worked pretty well). There were also a pair of shoulder buttons, volume + and - buttons and Select and Start buttons. A slider switch on the right hand side was also present - this was a physical on/off switch. 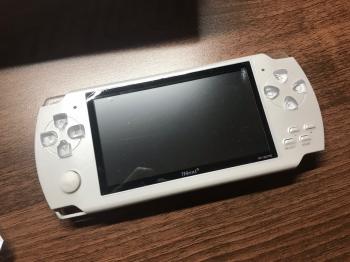 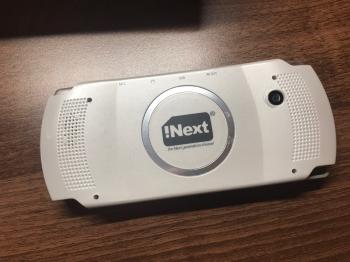 That on/off switch was actually more like a power cut switch because sliding it to the On position did nothing. To turn the unit on the Start button had to be held down (after sliding the side switch to the On position). After I figured that out, the unit powered up, presented a home menu screen with a number of games and I was able to play something right away. (I could not find a way to change or re-arrange the icons on the home screen by the way.) 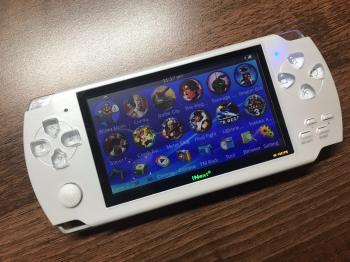 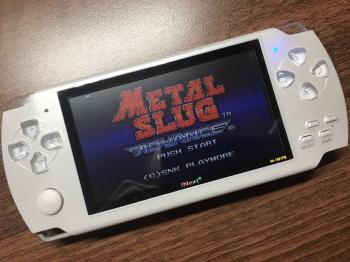 The marketing on the side of the box claimed that there are 10000 games. That's right! Wow, many game, such fun, right? Well as usual with these types of claims this was completely false advertising. Yes there were 10000 game entries but there were only 25 unique games! These games looped over and over after that point. Just as well because the navigation through the game selection screens felt slow and clunky. 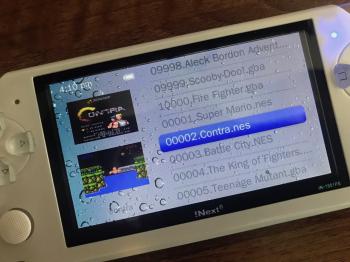 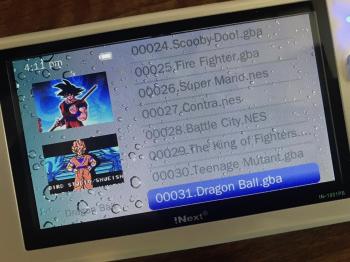 It was possible to load your own ROMs onto the device however. It claimed to have around 2Gb of memory for this (there was also an SD card slot though I didn't try to use it). From the pre-loaded game list it was evident that only NES and GBA games were available, however the marketing (or the lies) claimed that SNES, CPS and 3D (3DS?) games were also supported. Not so. At least not the ones I tried. CPS and 3DS games were not recognised and SNES games either didn't run, crashed the unit, ran at hugely inflated clock speeds or just presented random patterns on the screen. 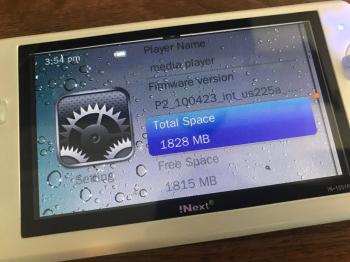 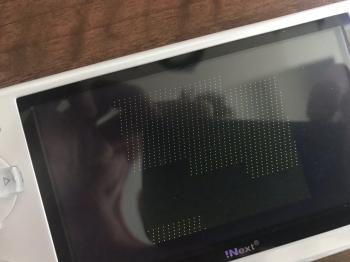 Back to the built-in games (or build-in as the packaging says!) - these ran mostly fine. There was some noticeable jitter in animation with the more 3D intensive games like Tekken 3 and sound was flaky on the most part (especial in Super Mario), but they did work and were fun to play. Which brings me around to the sound - there was a constant hiss coming out of the speaker. Headphones didn't have this issue. I thought I'd do something about this, so the console was taken apart! There were only 4 screws holding it together, Phillips type. 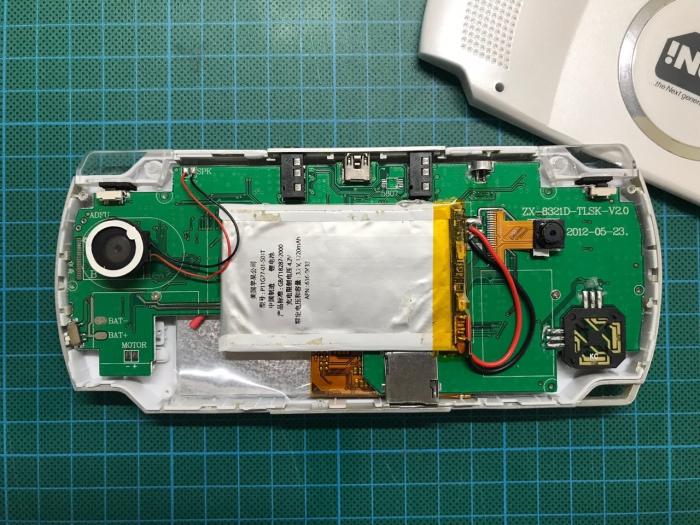 The motherboard had a label - zx-8321d-tlsk-v2.0 and a time stamp of 2012-05-23. This console has been around for a while but I couldn't find much information on it, at least not in English. It was interesting to see that there were pads for connecting a motor - for a rumble feature no doubt. All in all, nothing terribly exciting was present on this side of the motherboard. 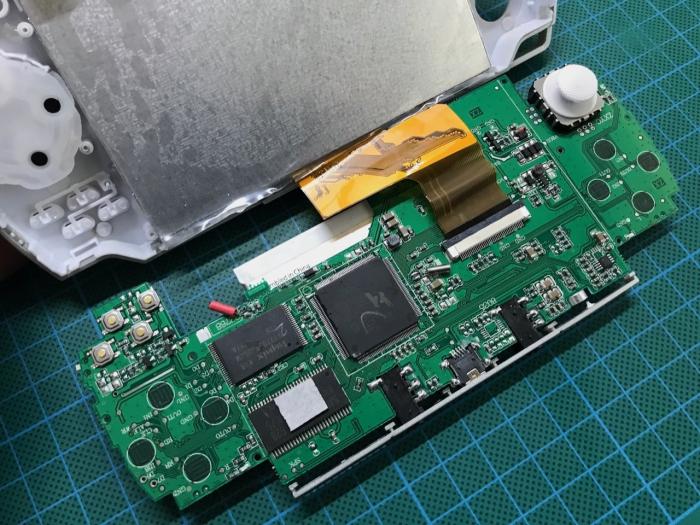 The other side didn't present anything eye-popping either but I had to have a look. What I did notice straight away however was that the motherboard had only 2 screws that held it to the front of the case. There were other screw holes but they were not populated. I guess that was one way of cutting costs!

Anyway to the hiss and a quick mod. I put a 220uF electrolytic capacitor across the speaker pad and the hiss mostly went away. Then, I noticed a tick coming through the speaker which was there previously too but with the hiss gone it was more noticeable. Ah well I couldn't do anything about that without spending considerably more time. 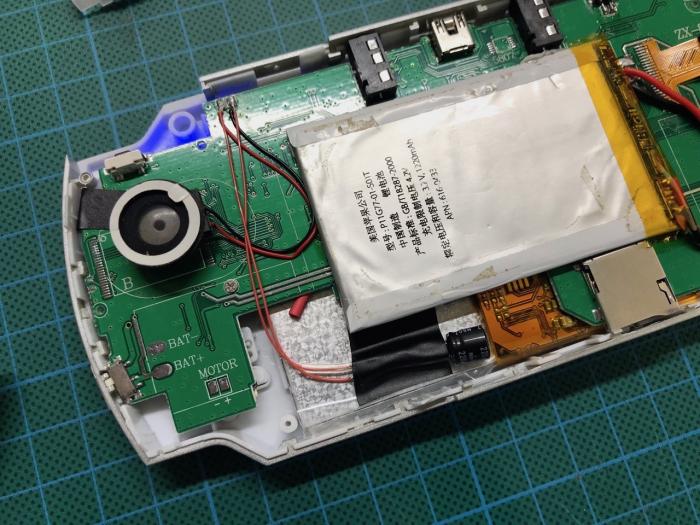 Back together it all went. It was a little difficult to get all of the rubber pads in place with their button contacts on the motherboard. I resorted to using electrical tape to stick them in place for alignment. When I was putting the rear case half on I noticed something funny - the hole and label for the microphone was in a completely wrong location relative to where the microphone was on the motherboard! Talk about quality control! 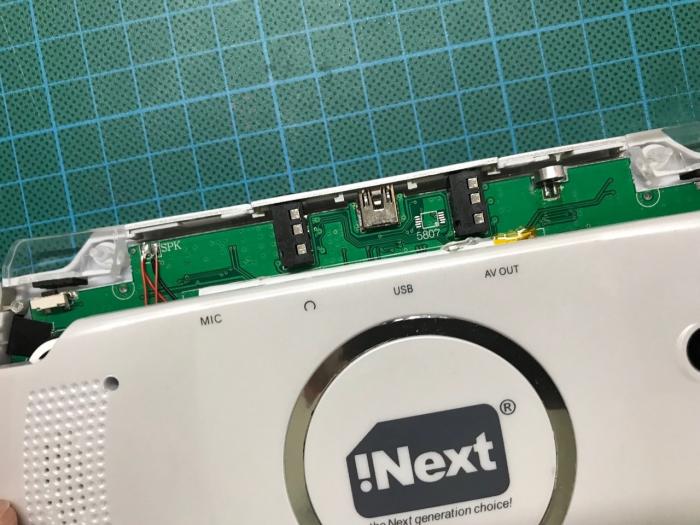 While on the topic of quality. Lets get back to that power adapter. It weighed next to nothing, which made me suspicious of its circuitry and so I needed to look inside of it. There was just 1 screw holding it together. 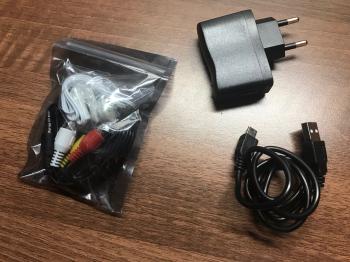 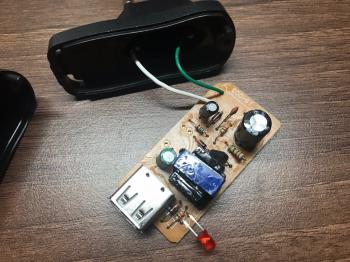 I don't know much about electronics, especially about the design of AC/DC power converters but I know enough to never plug this one into mains power! I've cut the wires on it right away and threw it in the bin. The USB cable was handy though, I could charge the console by connecting it to my laptop.

I could go on about this console for a while longer but I think it's not really necessary. I've not covered its other features like MP3 playback, camera, eBook reader, etc - but would anyone really use those? I don't think so. So is it worth it? It's a hard question to answer...I'm glad I have it, but I would not have bought it myself. It's a nice device to play GBA and NES games but by design it encourages software piracy. The device works but it's quite poorly built, both hardware and software wise.

There are definite plus sides however. It can save the state of the games, the screen is quite good and it feels comfortable in your hands. I travel for work often so will definitely be taking it with me, its low weight being an actual plus factor here! For what it's worth, a little bit of retro gaming time while on the road is exactly what this device will cover.

All content and opinions expressed on this Blog are my own and do not represent the opinions of my employer (Oracle). Use of any information contained in this blog post/article is subject to this disclaimer.
DIY, Electronics, Games, Console, Review, RetroGaming
Igor Kromin