6-Sep-2018
One of the web app projects I'm working on had an interesting requirement recently - it needed to provide a save/load feature without relying on cookies, local storage or server side storage (no accounts or logins). My first pass at the save feature implementation was to take my data, serialise it as JSON, dynamically create a new link element with a data URL and the download attribute set and trigger a click event on this link. That worked pretty well on desktop browsers. It failed miserably on mobile Safari.

Problem - Mobile Safari ignores the download attribute in the link element. This leads to the serialised JSON data being displayed in the browser window without any way of storing it on the user's device. There was no way to disable this.

Solution - Present the user with something that stores data and that they can save to their device. An image is an obvious choice here. This doesn't create the same save/load experience but is close enough to be workable.

I did try using QR codes for this and found them incredibly easy to generate but the decoding side was not so simple and required rather large libraries to be included, so I quickly discarded the idea of using them.

The challenge then was to work out how to store arbitrary text data in a PNG. This was not a new idea and has been done previously, however I didn't want to have a completely generic storage container and was happy to impose some constraints to make my job easier.

Images are fundamentally 2D arrays of pixels. Each pixel is a tuple of 3 bytes, one for each colour component - RGB. Each of the colour components has a range of 0 to 255. This lends itself to storing byte/character arrays naturally. For example a single pixel can be used to store the array of ASCII characters ['F', 'T', 'W'] by encoding their ASCII codes as a colour intensity like so...

The result is a rather grey and boring pixel but it stores the data we want. Whole sentences can be encoded in the same manner - "The quick brown fox jumps over the lazy dog" - is a sequence of these ASCII codes...

The last 3-tuple only has one character code so it is padded with two zero values to produce the resulting pixel.

That was the basic approach. Then I had to address my requirements:

Converting objects to a byte array

So now I had the general approach worked out and had a container for my byte array. The next step was to convert my objects into a form that could be stored in a byte array. This was easy, using JSON.stringify() and TextEncoder.encode() I could get a Uint8Array. I could also then work out the size of the square image that would be big enough to store this data.

Then it was time to take my byte array data and convert it into an ImageData object that could be used with a canvas. That's where I came across the first issue - ImageData expected a Uint8ClampedArray and I had a Uint8Array. Fundamentally though since my data was already 'clamped' in a sense by the TextEncoder conversion I didn't really have to worry too much.

Since I needed a lossless format to store my image data I went for PNG as the output format. This also meant that instead of storing data as RGB, it would be stored as RGBA. There was an additional Alpha channel per pixel and therefore an extra byte to play with. However after some experimentation I ran into an issue that had to do with RGB corruption when the alpha channel was set to zero.

That threw a spanner in the works and I had to write code to convert my 3-tuple byte array into a 4-tuple array with the 4th (alpha) component being set to full opacity (255). This turned out to be an advantage for decoding later since I could skip all zero-padded data easily. It wasn't the most efficient code but it did the trick.

As a bonus I now had the correctly typed Uint8ClampedArray byte array and could finally construct my ImageData object.

With the ImageData object available I could now create a canvas and draw the image data that was holding my encoded JSON. First the canvas was created 'off screen' and its context retrieved and the background set to a solid colour (actual colour doesn't matter here).

Then I could 'draw' the pixel that represented the size of the square image that encoded my data.

Then I could draw the image data...

The image could now be saved from the canvas to the file system (or in the case of mobile Safari displayed in a new tab) with a bit of jQuery code... 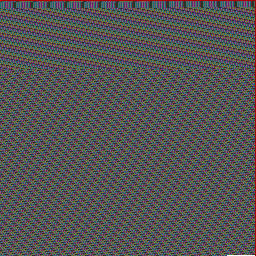 Of course the next step is decoding an image and getting the original JSON back out of it, that will have to wait until the next article however, which is available now - Retrieving data from hijacked PNG images using HTML canvas and Javascript!

All content and opinions expressed on this Blog are my own and do not represent the opinions of my employer (Oracle). Use of any information contained in this blog post/article is subject to this disclaimer.
Programming, HTML, JavaScript
Igor Kromin