1-Jul-2015
NOTE: This article is 3 years or older so its information may no longer be relevant. Read on at your own discretion! Comments for this article have automatically been locked, refer to the FAQ for more details.
I've been playing Fallout Shelter since it came out and after some initial struggles I finally got it to work on my iPhone. Well, that was not the end of the journey in terms of problems I've encountered. This is a collection of all the bugs and glitches and some of the more amusing features that I've come across in this game.

Lets start with the actual bugs/glitches that I've come across...

Stuck health bars
The health bars automatically display when there is a crisis in progress e.g. Room on Fire or Radroach Infestation. This is very helpful, however sometimes these bars get stuck and remain shown even when you select a dweller in a completely different room. 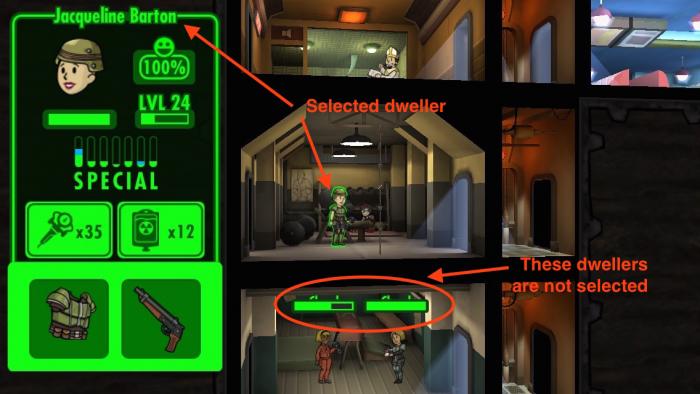 Stuck room descriptions
When you select a room, its description is shown at the bottom of the screen. That's great, until one of these remains at the bottom of the screen permanently and overlaps the display of the actual selected room. In the photo below, both Fortified Vault Door and Warehouse appear simultaneously even though I am currently looking at just the Warehouse. 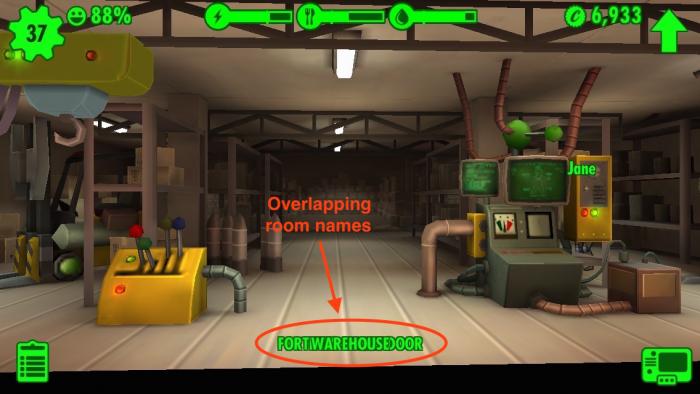 Screen is scrolled into the rocks when collecting resources
Sometimes when I am collecting resources and instead of a simple tap my finger happens to linger on the screen slightly longer than it should, the screen jumps and scrolls me into the rock way below my vault. I admit that this could be considered a user error, but the game should have some drag tolerance when resources are being collected. 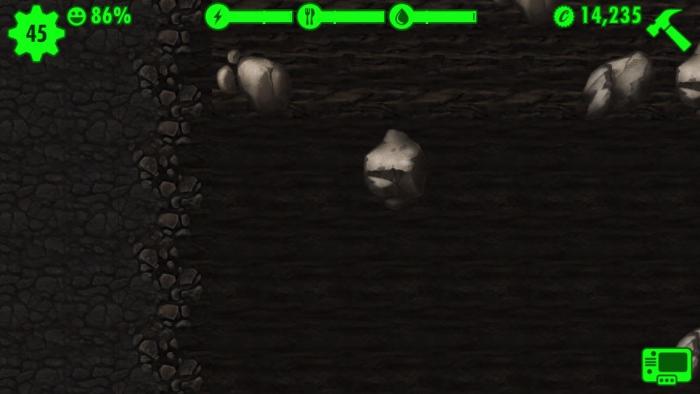 Tapping rush or other buttons is ignored
This one is very annoying. Many times when I tap the Rush button, it 'clicks' because you see the rush symbol change size, but nothing happens. This kind of problem occurs for many other buttons too. Sometimes tapping a button like the next explorer button would close the explorer window completely instead of showing the next explorer. It feels like the game processes these taps as taps on whatever is behind the button instead of the button itself. 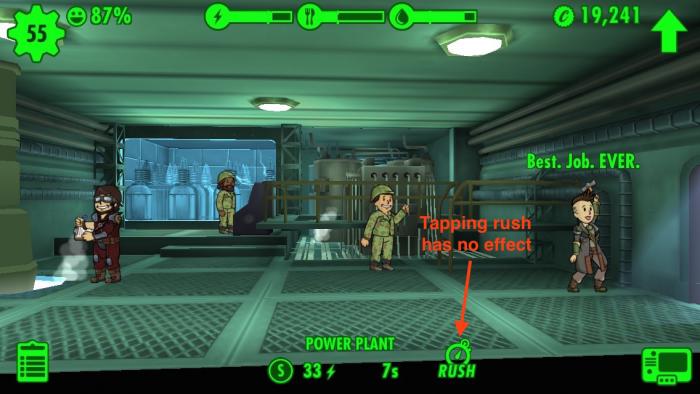 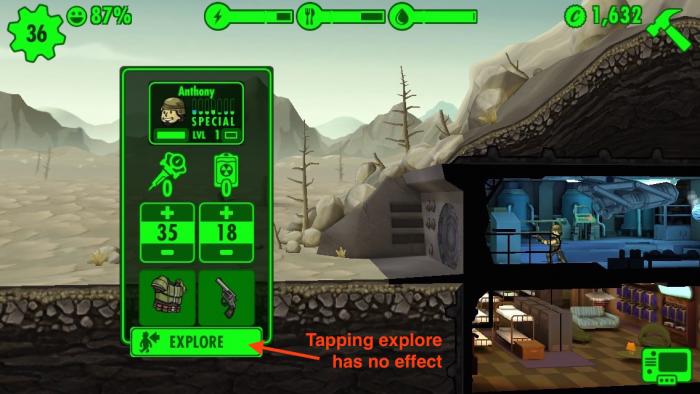 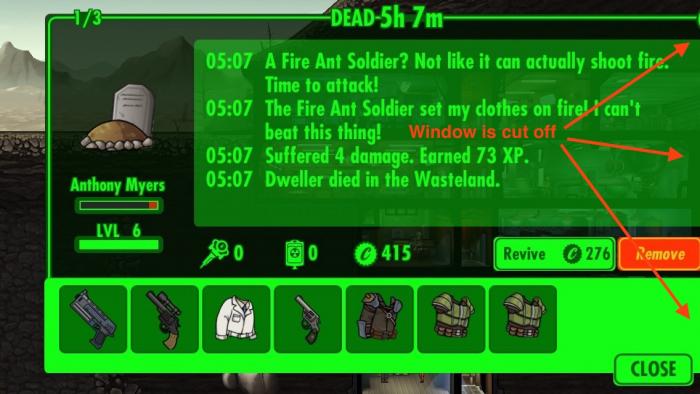 Incorrect room roster displayed
Sometimes when you select a room, the room assignment roster, which is brought up by clicking the clipboard button at the bottom left of the screen, shows the wrong room. You can see in the screenshot below I have a room with two dwellers selected, but the roster is showing 0 dwellers. More so, the roster is for a completely different sized room. The only way to fix this one was to force close Fallout Shelter and open it again. 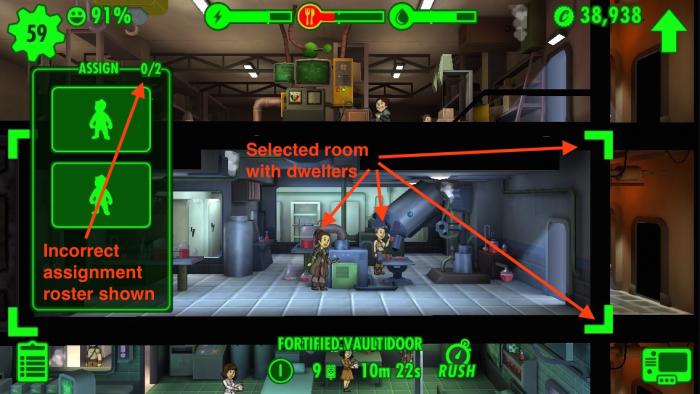 Strength centre dwellers block one another
If you have a strength centre that's only 1 room in width and two dwellers inside it, the frontmost dweller blocks access to the dweller out the back. It is possible to get to the dweller at the back by moving the screen around a little, but since the game tends to snap the screen back to focus on the middle of the room, doing this takes a couple of attempts if you want to drag the dweller at the rear of the room out. 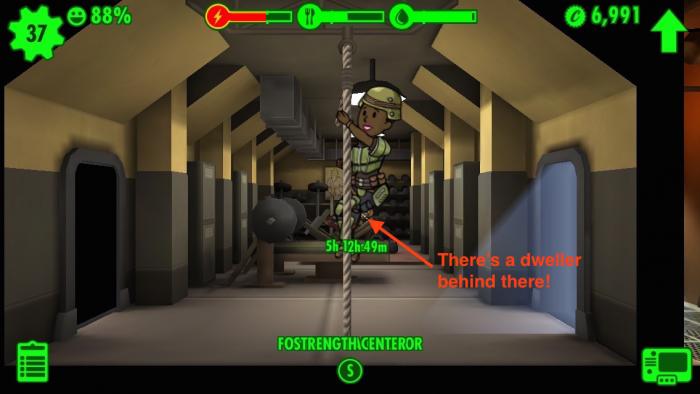 Dwellers spray each other with fire extinguishers
So the room is on fire and you have a fire extinguisher in hand, what do you do? Well apparently some of the dwellers like to spray other dwellers in the face instead of putting the fire out! All a bit of fun isn't it? 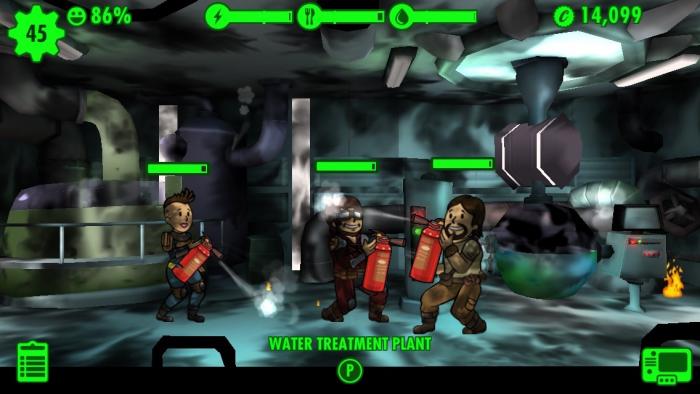 No getting your family pregnant
So I was trying to make more babies to raise my population, I put sexy sleepwear on the girl to get her Charisma up, left her in the room with one of the male dwellers. Then nothing happened, for a long time. This was odd because the same formula worked for a different female dweller and she did get pregnant. I zoomed in on the room and what do I see? 'Nothing like hanging out at home with my family.' I tapped both dwellers, they had the same family name! Ha! Looks like the game won't let you inbreed your dwellers, no matter how sexy they dress. 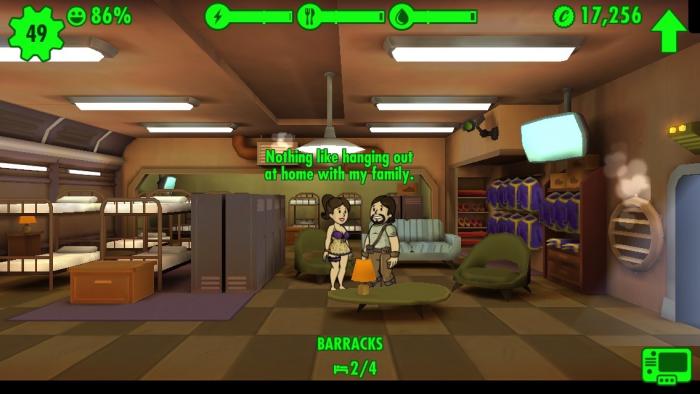 That's it for now. If I come across more issues I'll write them up, don't forget to share your experiences in Fallout Shelter in the comments section.

All content and opinions expressed on this Blog are my own and do not represent the opinions of my employer (Oracle). Use of any information contained in this blog post/article is subject to this disclaimer.
Apple, Games, iOS, FalloutShelter
Igor Kromin