25-Jan-2016
NOTE: This article is 3 years or older so its information may no longer be relevant. Read on at your own discretion! Comments for this article have automatically been locked, refer to the FAQ for more details.
Recently I spent a bit of time upgrading an old Dell Vostro 1510 laptop with an SSD drive. The improvement was quite decent though overall this laptop would not come out on top in any benchmark results even with this upgrade. That is mainly due to its graphics card and processor, however if you have one of these and want to give it a little boost and extend its usefulness then upgrading the hard drive to an SSD is worthwhile.

A while back I did a similar kind of upgrade on a Sony VAIO SVE151A11W laptop. Check out that article for more details about software used to copy files, etc. I won't be covering that in this post. 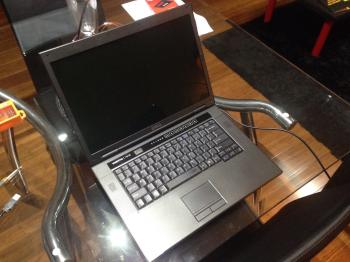 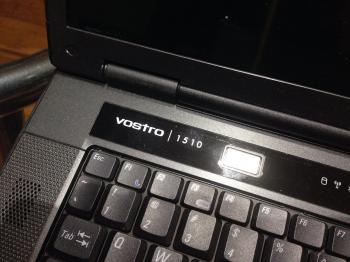 The actual upgrade is super simple for this laptop since all of the components are easily accessible via removable panels on the bottom of the laptop. It literally took a couple of minutes to remove the old hard drive and put the new SSD in. Of course this doesn't take into account that you need to copy all the files across, etc.

That's exactly half! ...however it's still 34 seconds until its booted up, which to me would feel like an eternity. 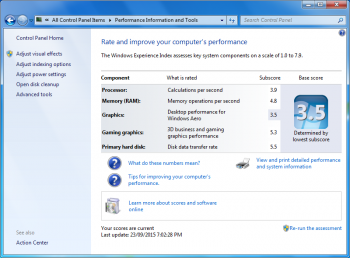 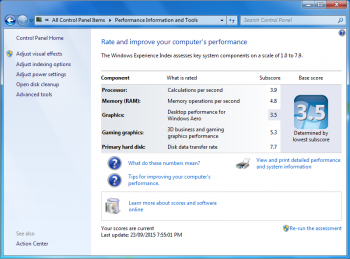 No that's not a mistake, it came out to be 3.5 before and after the upgrade. The only difference is of course with the Primary Hard Disk score, which was 7.7 with the upgrade vs 5.5 without.

So how do you read this? Well since the processor and graphics scores are terrible in both tests, before and after the upgrade, the overall score would not change and that's expected. This would have a dramatic effect in file access and if virtual memory is being used then that would speed up as well and lets face it with 4Gb RAM on this laptop, virtual memory would come into play every time you use it.

Application launch times were noticeably faster after the upgrade, but when trying to run something computationally intensive like CAD software, sadly it was game over.

So was this upgrade worth it? I think so, even if it was just to extend the usefulness of this laptop for a bit of time, and especially if you're only going to use it for emails and some internet browsing. If you think that it will radically change the performance of the laptop though, then you're out of luck.

All content and opinions expressed on this Blog are my own and do not represent the opinions of my employer (Oracle). Use of any information contained in this blog post/article is subject to this disclaimer.
DIY, Modding, Dell, HDD
Igor Kromin