Improving slow download speeds on the PS4 and PSN

11-Jan-2017
NOTE: This article is 3 years or older so its information may no longer be relevant. Read on at your own discretion! Comments for this article have automatically been locked, refer to the FAQ for more details.
I always tend to play catch up with the games I get as presents on PlayStation so the usual course of events when starting a new game is to wait for the update to finish downloading. Sometimes this can be quite a long wait, going into expected download times of longer than 24 hours.

To no surprise, when I put in Star Wars Battlefront, I was hit with a whopping 23 Gb update and a 6 hour wait time. This was actually on the quicker side of the downloads I have been getting, but still worked out to be roughly 1Mb/s. That's not bad, but when you consider that I have a fibre-to-the-building connection, it becomes horribly slow.

After reading up a bit on the topic of how I could improve that and making some changes to my PS4's network configuration, I was able to increase the download speed a tenfold, to over 11Mb/s. Now that was more like the kind of speed I would have expected. It also meant that I didn't have to wait to play Battlefront until the next day, I could play it that evening!

So what was the magic setting? The DNS servers configuration! As described in this article - A Short Pause Remedy For Slow Download Speeds On PlayStation Consoles, however I didn't follow the exact same steps as described there. 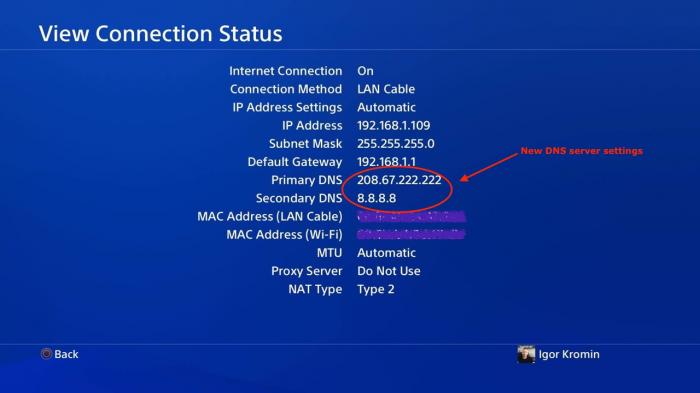 I was really surprised that made a difference actually, so decided to do some investigation. Using PingPlotter I collected ping time statistics for both of the above DNS servers over a five minute period. These were the results...

That was not a huge difference. In fact I would not count less than 1 millisecond as significant. There had to be something else at play.

Looking at the route for both of the DNS servers paints quite a different picture. The route to Google's servers was shorter but slower whereas the route to OpenDNS was longer but quicker.

In my case it looked like the maximum latency was at my ISP's end. Also the gateways for Google vs OpenDNS servers were different. The outbound gateway to Google's DNS suffered much worse maximum latency than the gateway to OpenDNS servers. I presume that also meant that Google's DNS was resolving to different region PSN servers (or at least giving a different and slower route) for me compared to those via OpenDNS. The almost 100 millisecond difference in maximum response times on my ISP's outbound gateways would in this case make quite a difference.

Whatever the case the conclusion is you need to experiment with DNS settings and pick those that work best for you.

All content and opinions expressed on this Blog are my own and do not represent the opinions of my employer (Oracle). Use of any information contained in this blog post/article is subject to this disclaimer.
Internet, Sony, PlayStation, PS4
Igor Kromin