25-Jan-2018
NOTE: This article is 3 years or older so its information may no longer be relevant. Read on at your own discretion! Comments for this article have automatically been locked, refer to the FAQ for more details.
Back in 2016 I bought a cheap laptop for travel that I upgraded with an SSD. Unfortunately this laptop was the kind that came with a 32Gb eMMC (drive C) and was preinstalled with Windows on that drive. I didn't care back then as all the photos and anything else that was going to be stored was going to go on the SSD (drive D). Now this laptop is used as a media player and so really doesn't have anything installed on it apart from a couple of apps like Plex, iTunes, Chrome and Crossy Road. There is a Java install but that doesn't take up much space. No other apps are required so there's nothing else there.

Recently Windows has been bugging me with update popups so I caved, only to be presented with this... 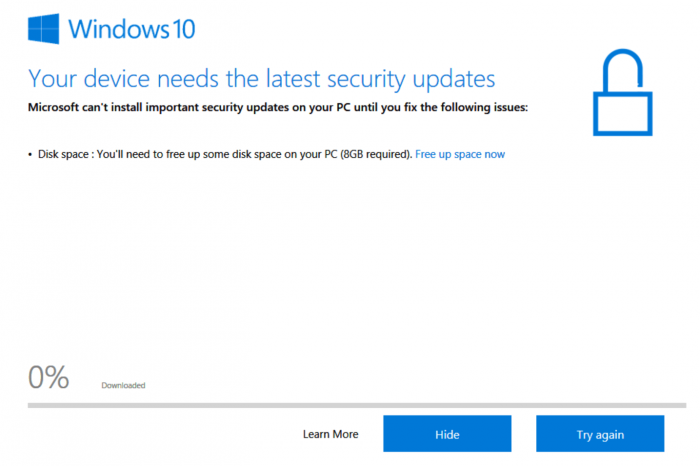 What?! I needed 8Gb of free space (on drive C mind you) to install the Windows Fall Creators Update. That's 1/4 of the capacity of the entire disk! I think that manufacturing a laptop with only 32Gb of system disk capacity is a crime against humanity on its own but this latest gift from Microsoft completely trumps that!

I was curious to see what was taking up all the space, and lo and behold...it was Windows on the most part... 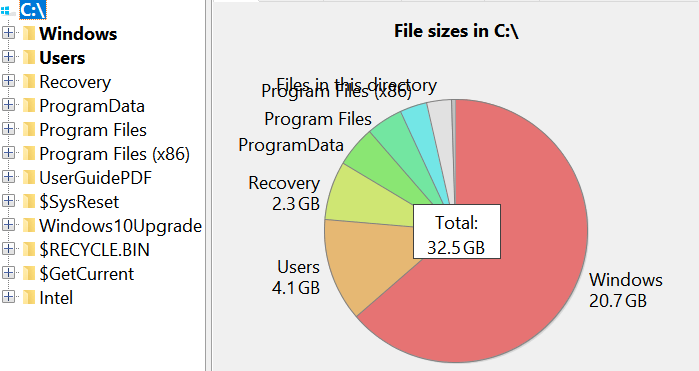 Checking Explorer, it was telling me that I had just over 3Gb of free space. Great! Well that meant I only needed to free up 5Gb right? Should have been a walk in the park! (It was not.)

Since Windows Update didn't give me an option to use an external disk, I had to try other means. It did launch Disk Cleanup for me (so many thanks!) - unfortunately that could only free up 1Gb. 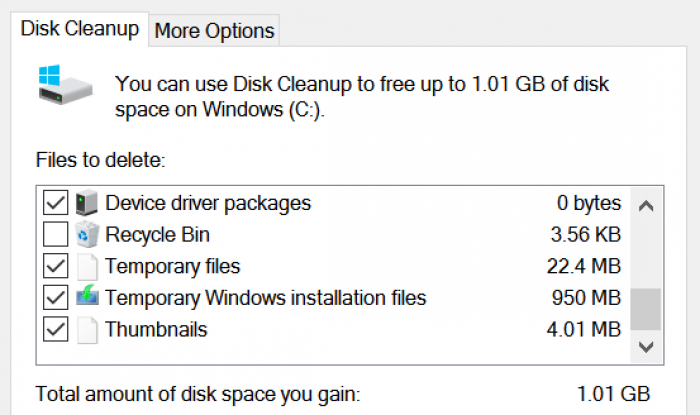 That wasn't great so I thought maybe I can move the virtual memory swap file to the SSD (should have done that to begin with really!) That freed up another 2Gb. 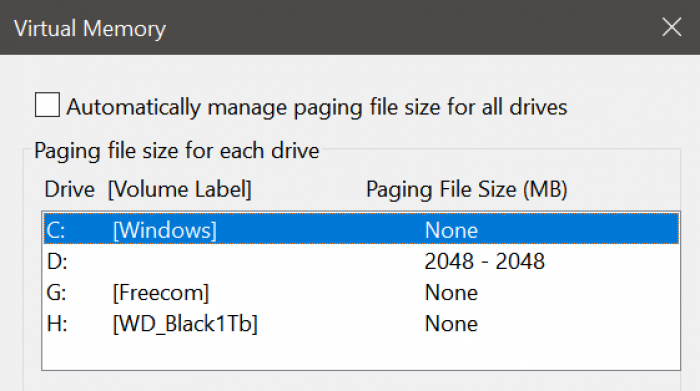 I was on a roll but still nowhere near close to the 8Gb of free space I needed. I found this article that had some useful information about the dism.exe tool so I tried all the steps there only to get about 0.5Gb of space freed up! It actually used up some more space while it was running before freeing some - I found that a little odd.

Checkpoint. I had about 6.5Gb of free space now. By this time I've already spent around 3 hours messing around with the laptop. This was on my day off too. Time well spent, thanks Microsoft!

Times were getting desperate. I decided that since this laptop is on all the time, I can turn off hibernate...

That gave me about 0.75Gb more space. I was getting so close. I could feel the taste of the update in my mouth!

At this point I couldn't think of anything more but to go searching through the Users directory to see what was taking up space there, it was taking up 4.1Gb after all. I figured there must be something I could remove there, maybe old photos I forgot to move to my file server, something.

There weren't any old photos or videos or any real data files, but I did find Apple's Installer Cache. That was 655Mb worth of junk I could delete. It was nuked with prejudice! 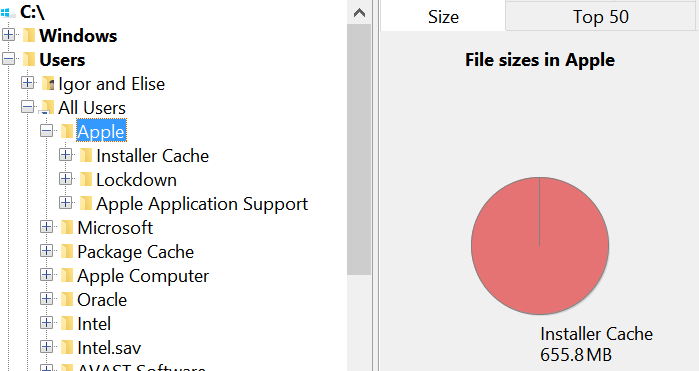 Then, I almost cried...7.99Gb free space! It's like the storage gods were turning against me.

I still had hope though. The windows_ie_ac_001 folder was hiding a few gems. I know this location is used by the Microsoft Store and should not be tampered with manually but at that point I didn't care. I saw that there were 4 versions of Dashlane installs. I deleted all but the most recent (I opened Dashlane to verify it was running the most recent version in this directory first.)

That should have freed up around 300Mb of space but at the same time something else consumed some space so I only just barely managed to free up enough to get 8.01Gb free. It was enough though!

The update went ahead. I decided it was a good time to run some errands so left home. Coming back a few hours later the update was at 28%. I left it be and checked back about half an hour later only to see that the Previous Version of Windows was being restored, the update failed!

Now I was back nearly where I started, not enough space once again. I was still determined though. After uninstalling Chrome and Dashlane and deleting any other cache or temporary file I could find, I was back to just over 8Gb of free space. It took me maybe an hour to get to that point.

This time the update was successful...another 3+ hours later! I was finally presented with this...

So overall I spent pretty much the entire day trying to free up space and then waiting for the installer to finish. Was it worth it? Not really, but at least the update popups went away - for now.

All content and opinions expressed on this Blog are my own and do not represent the opinions of my employer (Oracle). Use of any information contained in this blog post/article is subject to this disclaimer.
Microsoft, Windows, Laptop
Igor Kromin