Trying out media.net ads as a drop in replacement for AdSense

27-Feb-2018
NOTE: This article is 3 years or older so its information may no longer be relevant. Read on at your own discretion! Comments for this article have automatically been locked, refer to the FAQ for more details.
AdSense advertising revenues fluctuate every month. Some months come out much better than others but sometimes you get a month that has given such dismal revenue that you start to consider other options. This is what happened in January. After some consideration I thought that I may as well try out media.net and divert a fraction of my ad impressions to them. This was my experience...

First some background - My current 30 day impressions counts are around 80k. This number grows at a steady pace as I get more visitors of course. Around half of these impressions come from two ad units, one right after the article content and then one after the comments. This also equates to around 40% of the advertising revenue received. It's a considerable chunk and not something I like to mess with too much so I opted for a small and safe approach for phasing in media.net ads.

I figured that initially I could divert 20% of the impressions from the above ad units to media.net. I signed up and the next day I was rejected. That wasn't a great start. I realised that when I filled out the sign up form that I didn't put the full blog URL (just had the domain without the /blog there) so I resubmitted my application with the full URL. It was accepted.

Obviously media.net doesn't try to think too hard with their applicants. If they did, it would have been obvious that of course I wasn't going to be having ads on the front page that I submitted. They clearly didn't look beyond the landing page. Oh well moving on, it was a red flag though.

After being accepted, I received a couple of welcome emails and was assigned an account manager, which was interesting and different to how AdSense does business i.e. you're on your own. I proceeded to create two ad units that I was going to drop into the slots that occupy my current AdSense ad units. I was surprised with the available sizes...

Archaic. It's like media.net is still stuck in the early 2000s. Considering that AdSense has been offering responsive in-article ads since mid-2017 (which I use in the two slots I mentioned already) I was taken aback that not a single responsive ad unit was offered by media.net. Well since this was a trial run and my biggest audience is on the desktop, I picked the 728x90 Leaderboard units.

Meanwhile more emails from the account manager kept on coming. These were all automated of course. I replied to one of them only to get more automated emails about how media.net will work with me to tailor their ads to my content, etc. Another red flag here maybe? Lots of promise always arouses suspicion in me.

I put the new ad units on my blog and left them to run their course. It was going to take up to 15 days for media.net to adjust their ads to my content apparently. This was shockingly slow compared to how AdSense does things (i.e. AdSense bot crawls your page within minutes)! Needless to say all I was seeing were non-relevant text ads like this...

That was the lowest of the low quality ads I've seen in a long time! For the next 10 days nothing improved. The ads didn't change, the revenue stayed at $0 and the account manager kept on promising that "things will improve, just give us time". 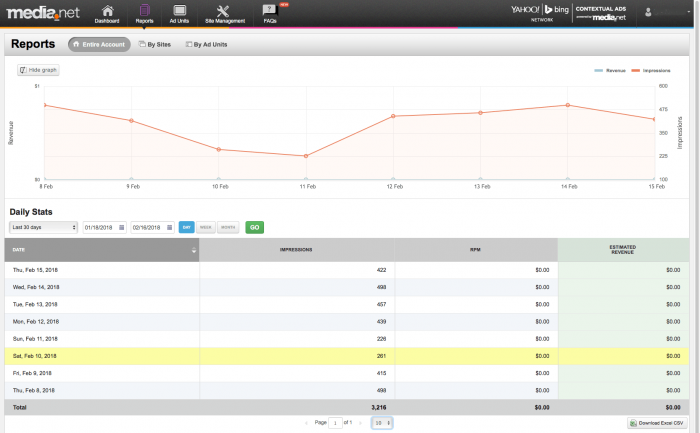 After the initial 10 day period I did give media.net a few more days but then I started to get annoyed. All I was hearing were promises and no visible actions. After a few more email exchanges with the account manager he informed me that in order to start getting graphical ads that I had to send them a minimum of 2k impressions per day!

We need at least 2000-3000 impressions on a daily basis to enable display ads.

Wow. You'd think that would be the kind of detail they would tell you straight up, not three weeks later!

Considering I was only diverting roughly 10% of my ad impressions to media.net, this was an unachievable goal unless I went all in with them. I wasn't prepared to do this. So, I pulled the plug.

AdSense ads came back full force into my ad slots and I saw an immediate boost to revenue there. It made me regret diverting any traffic to media.net for the past three weeks.

So would I recommend media.net as an AdSense alternative? The answer is a definite NO. With their mediocre choice of ad unit sizes, lacklustre interface and annoying account managers, it's very much a 2nd rate (maybe even 3rd of 4th rate) alternative that is not worth the time or the effort to explore.

All content and opinions expressed on this Blog are my own and do not represent the opinions of my employer (Oracle). Use of any information contained in this blog post/article is subject to this disclaimer.
Review, Google, Yahoo, AdSense, MediaNet
Igor Kromin