6-May-2016
NOTE: This article is 3 years or older so its information may no longer be relevant. Read on at your own discretion! Comments for this article have automatically been locked, refer to the FAQ for more details.
Some time during the week I noticed my digital photo frame stopped working. It uses a Raspberry Pi model A to run the jPhotoFrame software and sometimes the screen fails to turn back on after going to sleep overnight. This time the problem was different however. I noticed that the red power light on the Raspberry Pi was constantly flashing.

This is what I was seeing...

According to the R-Pi Troubleshooting page...

A blinking red power LED indicates problems with the power supply. On model A and B, it is hard-wired to the 3.3V power supply rail. If it is blinking, as one user has reported[1] it means the 5V power supply is dropping out. Use a different power supply.

Well the fix was easy then. My power supply was connected to a USB hub which then powered the RPi and the USB monitor, WiFi dongle, etc. Luckily I had an identical power supply as a spare. Plugging the other power supply let the photo frame start and boot normally. So problem fixed, but I wanted to know why it actually happened in the first place.

I checked the voltage output on both power supplies and it was pretty much the same and stable, so that wasn't it. 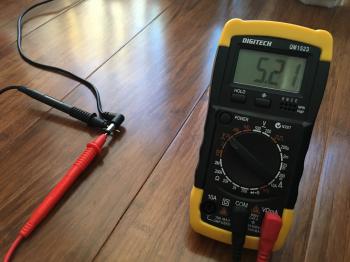 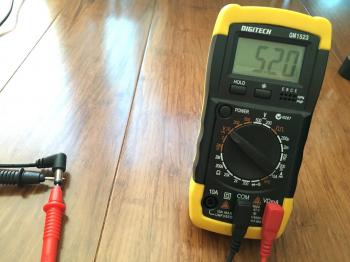 I didn't want to do any rewiring so didn't measure the current output, but this is what I suspected was going wrong. The power supply is a model WT0502000-MID which is rated at 5V 2A output.

I did a rough calculation of power requirements: 1A for the USB monitor (5W @ 5V according to specs), 150-300mA for the RPi (depending on load), 100mA for the WiFi dongle, 50mA for the USB storage. That's around 1.9A and is quite generous with actual values probably quite a lot less. Still this was close to the maximum output for the power supply. Still no problems, until I realised that I also had my RGB LED clock connected to the same USB hub as well.

The clock LEDs alone add around 6x 20mA of current draw, for a total of around 120mA, and this pushes the total current draw over the 2A maximum. Running it all like this for several months is what I believe caused the original power supply to stop working at it's peak output.

Lesson learned, lets see if the reduced current draw without the clock plugged in helps.

All content and opinions expressed on this Blog are my own and do not represent the opinions of my employer (Oracle). Use of any information contained in this blog post/article is subject to this disclaimer.
Electronics, RaspberryPi
Igor Kromin