12-Jul-2017
NOTE: This article is 3 years or older so its information may no longer be relevant. Read on at your own discretion! Comments for this article have automatically been locked, refer to the FAQ for more details.
I've had my new MacBook Pro for exactly a month now and have completely shifted everything from my 2012 Retina MacBook Pro over to it. Both machines are excellent engineering feats so I thought I would compare them to one another in terms of look and feel and performance. This first part of the article is going to cover the look and feel. The next part covering performance is available here.

Both of my MacBook Pros are 15" versions. The new 2017 model has a smaller footprint than the 2012 version. The width is almost 1cm less, depth is just over half a centimetre less and height is a quarter of a centimetre less. This makes the 2017 model fit into laptop bags that are designed for 13" laptops.

The Apple logo on the 2017 model is no longer illuminated sadly. However the new Space Grey colour option in my opinion is more visually appealing compared to the Silver option offered previously. 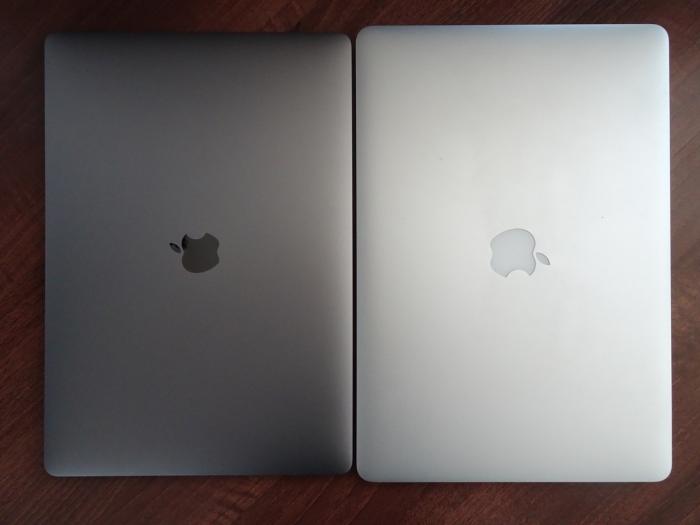 Full detailed specifications, including dimensions are available on the Apple Support site for the 2012 and the 2017 models. 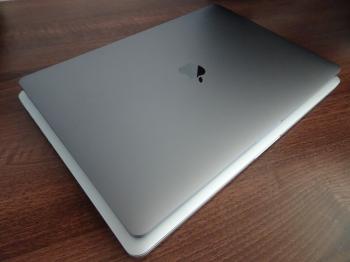 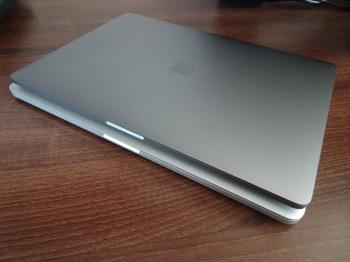 Side by side the new 2017 model does look smaller. The screen resolution and size are the same however. The bezel around the display on the new model is visibly smaller. 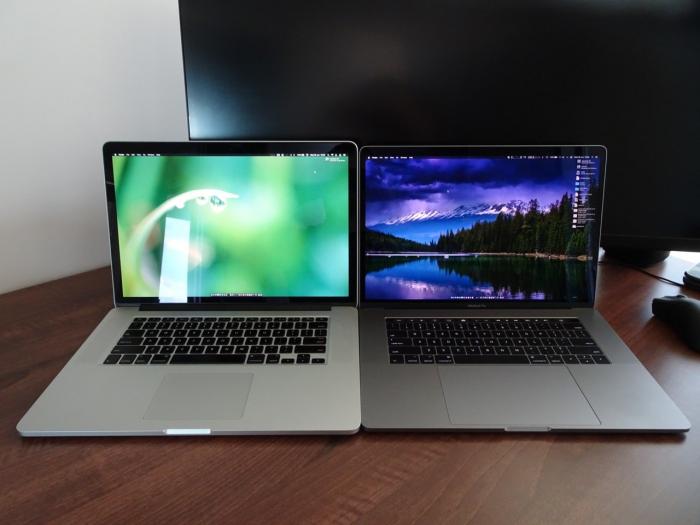 The body of the 2017 model is about a millimetre lower than the 2012 model when opened. 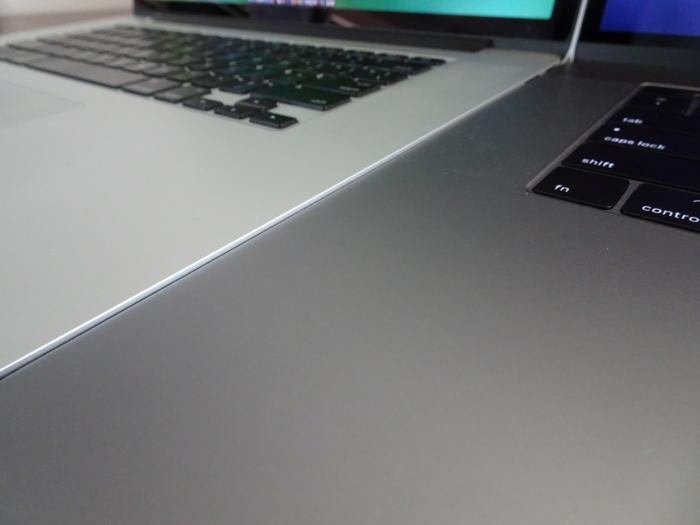 The trackpad and keyboard is where there are huge changes in terms of look and feel. The 2017 trackpad is huge! It took quite some time to get used to its size after switching from the 2012 model. The "clickiness" of the trackpad feels sharper on the 2017 model, which I don't particularly like, the 2012 click was much smoother and more pleasant to the touch. This is due to the new 3D Ttouch technology in the trackpad.

The keyboard of course is a new design on the 2017 model. The keys on this keyboard are considerably louder vs the 2012 model, they also have less travel. At times it feels like you're typing on a piece of paper that's making loud clicking noises. It's not a pleasant feeling really. The 2012 keyboard felt much better to type on.

Another notable change is to the arrow keys, the left and right keys are full sized keys on the 2017 model, vs being half-size to match the up/down keys on the 2012 model. Functionally this makes no difference, just creates the appearance of a more complete keyboard.

The other obvious change is that the 2017 model replaces the function keys with a Touch Bar and Touch ID sensor. Apart from not having a physical Escape key, this is an amazing change in my opinion. Being able to control and customise what 'keys' are shown on the Touch Bar is amazing. 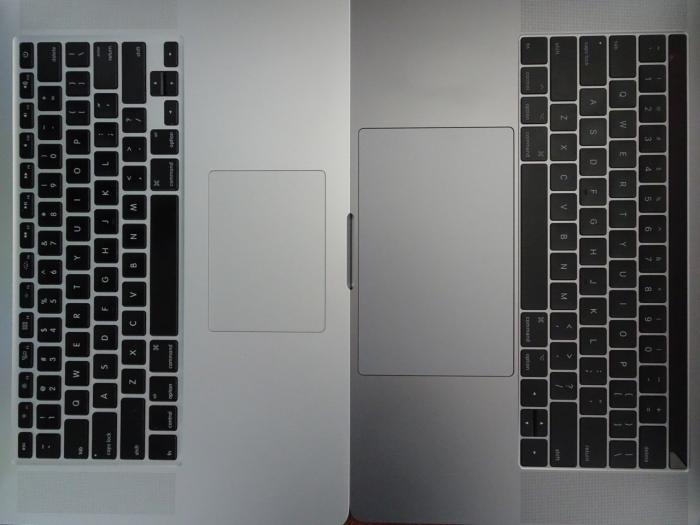 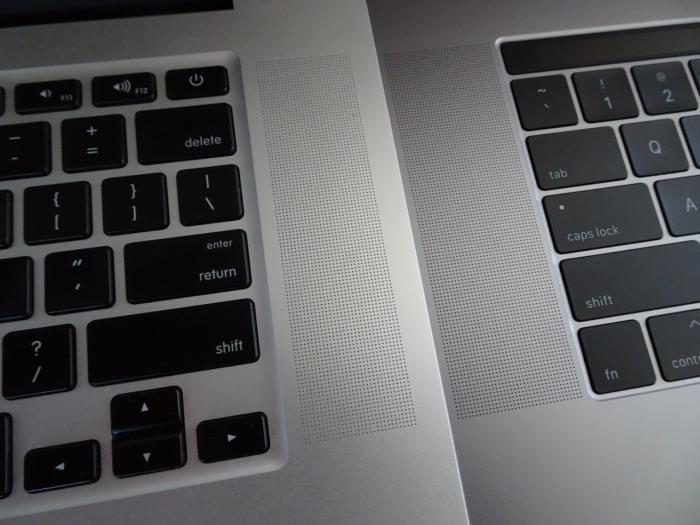 In terms of ports and connectivity the 2017 model really shakes things up and removes all ports and has just 4 USB-C ports (2 a side) plus a 3.5mm stereo port. The old style USB, Thunderbolt, HDMI and SD card ports that were present on the 2012 model are gone. The MagSafe 2 power connection is gone too, charging is done via USB-C on the 2017 model; this means you can plug your charging cable on either side of the Mac now!

At first I hated the fact that I would need to get all new cables and adapters for the new USB-C ports, but then I looked through all the dongles and adapters and cables I had to buy for the 2012 model and didn't feel so bad about it. I've actually reduced the amount of cables/adapters I need to carry with me now.

I've grown to really like the USB-C port and adapters on the 2017 model. For example, at home I use a Multi AV adapter to connect to my USB 3.0 hub, monitor and for charging my Mac. All of that needs just 1x USB-C port. Previously I had to connect 3 separate cables into my 2012 Mac to get the same connectivity. 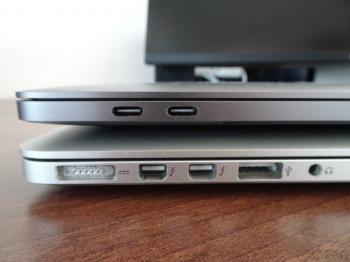 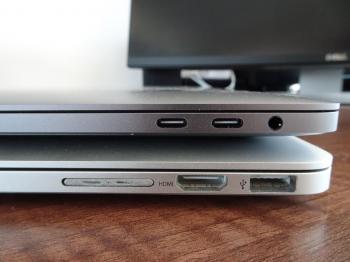 The power supply also had some changes. Gone are the rabbit ears that the MagSafe power brick had. There's just a single USB-C port on the power supply now, nothing else. I quite like this because now I can keep the cable separate and coiled up when travelling, makes it much more portable. Being able to use 3rd party cables to connect the power brick to the Mac for charging is great too, it means I can use a nice looking braided cable instead of the standard cable that comes in the box. 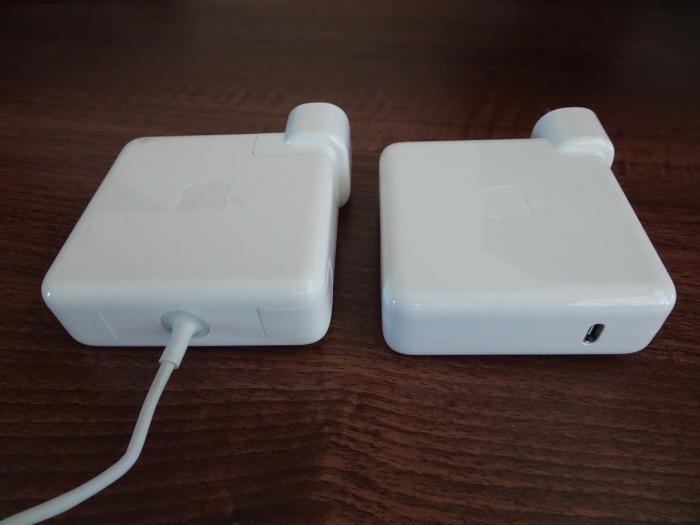 There are other notable differences:

Weight: The 2017 model is 190g lighter. This makes a huge difference when travelling.

Temperature: The 2017 model runs considerably cooler. This isn't because my 2012 Mac has dust in the fans as I've cleaned it recently. The area above the keyboard on the 2017 model no longer feels like an oven even at high loads. The fans have a different pitch compared to the 2012 model, not unpleasant, just different, and in terms of noise level - it's about the same on both models.

So I would say the 2017 model is a more portable laptop than its 2012 predecessor. There are some things that the 2012 model did better like they keyboard, but overall the 2017 version is a definite step forward.

In the next part of this article I'll compare the performance of these two laptops, both in terms of benchmarks and daily usage for coding/development purposes.

All content and opinions expressed on this Blog are my own and do not represent the opinions of my employer (Oracle). Use of any information contained in this blog post/article is subject to this disclaimer.
Apple, Review, Mac
Igor Kromin