9-Jan-2018
NOTE: This article is 3 years or older so its information may no longer be relevant. Read on at your own discretion! Comments for this article have automatically been locked, refer to the FAQ for more details.
I was in the process of adding a custom domain to a newly deployed project in Google App Engine when I came across this error - "domain is already mapped to a project." This was baffling as I've never had this domain mapped to any project and no-one else would have been able to map it either since that requires domain verification.

In my case the domain was atarigamer.com and this was the error I was seeing... 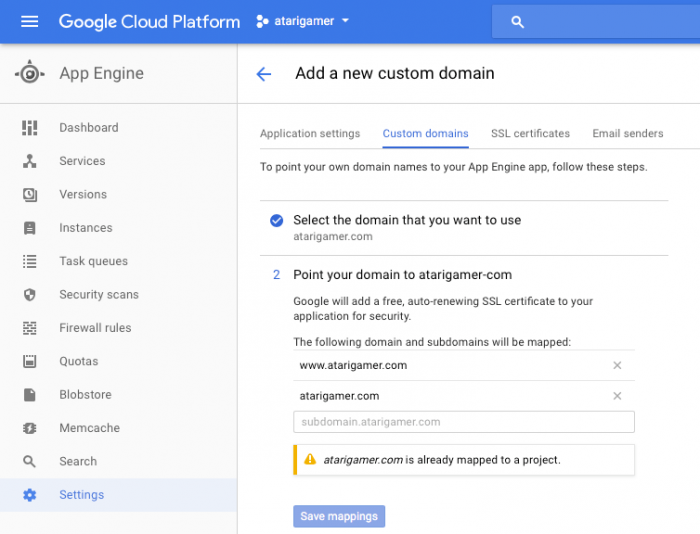 The error appeared after completing the domain verification steps.

There was no way to resolve this via the web interface so I turned to the gcloud tool. There was a beta feature in the tool that allowed for domain mapping configuration. The gcloud tool is part of the Google Cloud SDK which can be downloaded here.

To add a custom domain to your project simply run something like this...

Replace <your_project_id> with the ID of your project as found in the Google Cloud App Engine Console. Replace <domain> with the domain name you want to map to your project.

In my case the output was something like this...

When I went back to the Google Cloud App Engine Console I could see that the mapping was successfully created and was pending SSL certificate activation.

The only thing that this didn't do was create the 'CNAME' record for the 'www' subdomain. I wasn't too worried about that as I wasn't planning to use it anyway.

All content and opinions expressed on this Blog are my own and do not represent the opinions of my employer (Oracle). Use of any information contained in this blog post/article is subject to this disclaimer.
AppEngine, Google, Error, Howto, GAE
Igor Kromin